“You can’t fail if you never give up.” 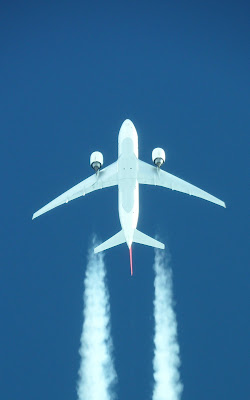 Last week I received an email from a future pilot who recently experienced a snag in his longitudinal axis.

As promised, my update about last stage Psychomotor and Psychology test, sadly, I didn't make it through. I just receive the email awhile ago, I can feel my heart is burning. This is my third attempt, but the first and second one I failed in the first stage, so it wasn't that depressing as this one because it's the last stage. What can I do to improve myself?? I even bought the aptitude software to prepare myself for this test, but it came out to be not the same kind of test. They used some kind of Vienna Software.

Failure is not uncommon, I knew some people tried for 7 times only they succeed! But its really heart pain when you want something so badly, and you don't get it. Also, the pressure given from the people around me make it even worst especially when they constantly tries to pull me down or telling me not to waste anytime to chase something that I've been failing in. I wish my heart is made of steel, so I don't get hurt deep inside me even though I always show the positive face to them.

Remember this: You cannot fail if you never quit!

The way I see it is you have four more times to catch up to those other people who eventually succeeded. And then if you don’t make it at lucky number seven... you have as many times as it takes to be a motivation for someone else.

This type of testing is the same during all psychological testing phases. None of this is secret stuff. The secret part is how to pass. You can pass by training your mind how to perform. Here is some advice on how to prepare for these tests. Below are samples from my airline tests, and those of my friends recently hired at the regionals. The testing can be anywhere from 2 to 3 hours and from what I hear, they're now on a computer. My NWA was 99% on paper. I thought they were pretty fun tests. If you view them as games, they can be.

Memory test, they will probably flash a photograph up for a second or two, and ask you some questions about it.

This is all about a scan. Learning to see an instrument and interpret it without spending a lot of time. Practice with a child’s picture book with lots happening on the page. Open the page quickly… see and think: Tree, 2 clouds, red car. Think color of the object you see. If it’s multiple items, then think the number. If not, then think only the object, that way your mind will know it’s only one. Open the book for a few seconds. Then try to write down everything you saw. Details of clothes, etc., Practice. Go to the next page and continue with the entire book. You can also practice glancing at a clock, then look away. Do you remember the time? Pay attention to ever detail you see in your world. Open your cupboard for a second. Write down all you saw with as much detail as possible. You are training your brain to see detail and recall. You can train your brain.

Logical reasoning can be confusing box patterns that the applicant will guess the next logic pattern in series. There might be some shapes that are inverted, upside down, or a mirror reflection. There are IQ books to practice, but you may not get the same test. But they are still useful.

How to prepare for this—use your practice test to not memorize, but ask yourself these questions: How can I identify the pattern? What is the subtle clue? Talk yourself through them. Pretend you have to explain to someone the reasoning why the next object falls into the pattern. This will train your mind to look for it.

Personality test could be up to 500 questions.

The best thing to do is answer honestly, and be consistent. They'll ask many of the same questions in different ways. If you are honest, who you are won't vary from question to question.

They may give you some flying type questions. A typical question may be about coordination asking about longitudinal, lateral, vertical axis. The basic flying stuff here, but they want to know that you know.

Know the terms and envision the lines. A little memory gouge I just made up for you:

Longitudinal—it’s a long way around the world. Best way to go is follow the line straight ahead.

Lateral—Flex those arms and show us your lats. Then stick those arms out as far as they can go to the side.

Vertical—Stand tall and look to the stars. 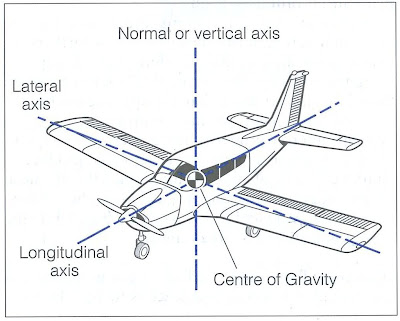 Once you have the lines figured out, and their directions, if they ask you what axis a plane uses to yaw, pitch, or bank, you can answer any question. See the lines on the plane above? Visualize what line that plane will rotate about for various maneuvers. See how it rolls over the longitudinal. Pitches over that lateral line. Yaws around the vertical.

You may get a reaction type test with a variety of digits, and you'll be required to identify numbers, words, letters, or pictures that appear in the second table. Yes, there is a time limit.

Make some and practice tables of your own. Train your eyes to see numbers, and letters. The observation game with the kid’s book will help with this too. You can teach your brain to remember. Create this chart to look like a bingo game. Actually, playing bingo will help. Playing kids bingo will help. They have bingo games with pictures.

For the questions, writing notes can Help. When I took this test I had a pen and paper. I would do the Oak and Hemlock question by writing the first initial for each tree the size relation. In seconds you can see who is the biggest: O h s. But now with computers, I suspect you can’t do this on paper, but you can think it.

There was another hand eye coordination test where different colors and tones flash at the same time. This was kind of fun. Just another game.

I have a game like this: Simon. Just checked on Amazon, and the game is $99. But for $10 they make a key chain. Might work. Simon Link.

I've hear lately there is a portion of this testing that uses a joystick control. I had a small hand held ball on the end of the stick when I played this game. key is you have to move your stick to match the object they display. The object moves and you chase it, hold it, stay with it. A bit more of a challenge than you think.

Don't worry if you think being left handed is a disadvantage, despite the tests being set up for a right-hand world. It's not. I'm right handed and did my A330 check in the left seat with the left hand, and did just fine. Now… playing games, that’s another story. But with practice you can do this!


Train your mind. Believe you will pass. You can pass this test!

Remember… stress destroys the memory. Don’t give stress a chance at attacking yours. Have confidence in yourself, and do not listen to those people who say otherwise. You really can train your mind—it’s one of the most powerful computers there is. If only we could access all it’s capable of. Start now training your brain.