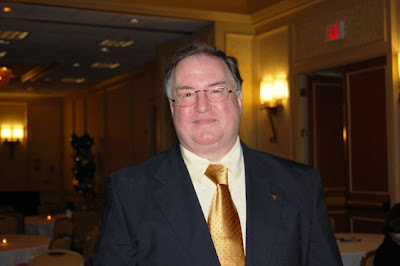 What could be the second best job to flying the newest planes of the future?

Ross Sharp, Air Show Consultant, has just been appointed consultant to the World War II Foundation, and is planning to go to Normandy next June to help with an event. 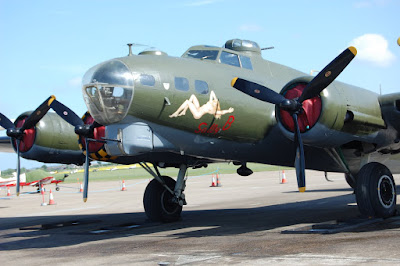 Here we see a lovely Fiat G.46 trainer, parked on the ramp with a Beech H18 waiting to depart. Behind, with the engines rumbling, is my friend Mike Woodley's great C-47A. It was in the 'Band of Brothers' TV series. This was a wonderful event , and I really enjoyed working at it.

Karlene: Ross, can you tell us a bit about yourself?

Ross: As you probably gather from my rather stilted usage of the English language, I am British, and having spent the last 10 years in New England (or England 2.0 as I call it), I can now ALMOST make myself understood on both sides of the Pond. Somehow, I find myself having spent around 40 years involved in aviation. 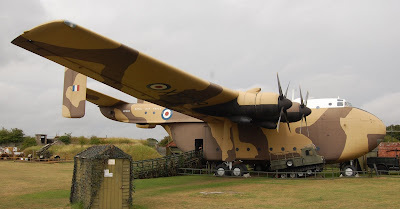 When introduced into the Royal Air Force, in March 1956, it became the biggest aircraft in the RAF! This example of the tactical transport/paratroop aircraft is, now, the only one left in the world. Unfortunately, the RAF Museum lost theirs to corrosion. An amazing beast, it was powered by four Bristol Centaurus piston engines. Imagine the sound of four Sea Furies in close formation.

Karlene: 40 years is an amazing career, but how did you get interested in aviation?

Ross: I can remember when it all started; I was 11 years old, and had just walked out of the house into the back garden. There was an ear splitting crackling sound, and I looked up to see a World War Two fighter in a tight bank, directly overhead. I was transfixed, and watched in awe as the Hawker Hurricane wheeled away east, heading towards the Rolls-Royce airfield at Hucknall, in Nottinghamshire, about 10 miles away as the crow (or Hurricane) flies. 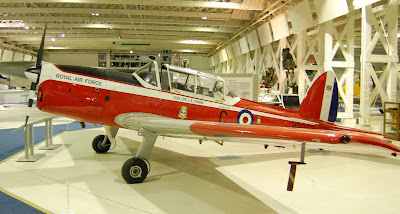 Designed in Canada, mostly built in Great Britain, the 'Chippie' was the backbone of the RAF's training fleet for many years. I had my first ever flight in a Chipmunk, with one of the Air Experience Flights of the Air Training Corps. This one is on display at the magnificent RAF Museum, Hendon. I still think of it as that, rather than RAF Museum, London, as it is now branded.

Karlene: That’s an incredible image, and one that would inspire anyone.

Ross: From that moment on, I simply knew that aircraft would be my life - I just didn't know how, but someway, somehow, I was going to be involved in aviation. Oh, then there is the fact that I already knew a great deal about Hurricanes. The Battle of Britain was still fresh in the memory of many locals, and there were veterans to chat with in abundance - sadly, not the case now, of course; and then there was the 'Spitfire vs. Hurricane' argument. Just like the 'Beatles vs. Stones', there was no real winner, except we Hurricane supporters KNEW which aircraft really won the Battle of Britain. Better gun platform, tighter turning radius, much stronger, with an ability to absorb a great deal of damage and bring you home - it had to be the Hurricane! 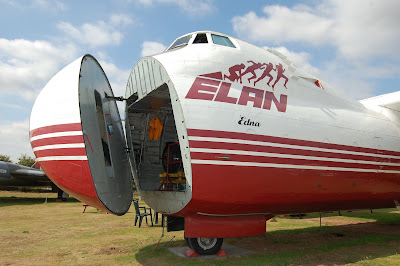 Here you can see a lovely, chunky A.W. Argosy - the civil version with the nose door, as opposed to the RAF version, with rear clamshell doors - on display at the Midland Air Museum, Coventry. I used to see this aircraft, regularly, when it was operated by Elan Parcel Service, out of East Midlands International Airport (EGNX). The Rolls-Royce Dart turboprops made a lovely whistling sound!

Karlene: It sounds like the hurricane is the winner to me too. So how did you find the path to becoming an air show coordinator?

Ross: I was holding down a job as a metallurgist in an engineering company, whilst being the Adjutant of a Detached Flight of No 126 (City of Derby) Squadron, Air Training Corps, when I saw an ad in the local newspaper for a museum position concerning aviation. I thought, 'I can do that!' and applied..... to cut a LONG story short, that is how I became the first (and ONLY) Assistant Keeper, Aviation in the history of Leicestershire Museum Service. I was seconded to EGNX to plan and execute a scheme to build a new aviation museum and viewing facility on a 12-acre site alongside the runway, The original is gone, due to airport expansion, and the new site is not what the old one was. 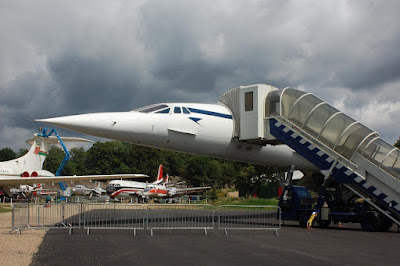 The home of many superb aircraft, the Brooklands Museum has lost its runway... where Wellingtons and many other Vickers aircraft used to to fly from... as this is now 'Mercedes World'. That being the case, when BAC offered the museum G-BBDG one of the two development Concords, it had to be cut into five sections, so as to be transported by road. Now reassembled, it is a wonderful sight. It reminds me of the time I managed a flight in G-BOAF - one of the British Airways Concorde fleet - from 'chocks' to Mach 2.02 and back. I was not 'down the back', but on the flight deck as a supernummary. Let me tell you, the view at FL650, through the fused quartz heat-shield, was stunning. At eye level there was a sharp line - blue below, black above...

Karlene: But this job opened a door to the next?

A lovely little 'feeder-liner'/corporate aircraft. Arose from a Brabazon Committee specification, post-WW2. Shown in the colours of Dunlop Aviation Division, it was actually transferred to the Pakistan Register for a time!

Karlene: I’m seeing a pattern in your life—one thing leading to the next. So where did you go from there?

Ross: This lead to a job with the Royal Air Force, as Deputy Air Show coordinator, first at RAF Finningley, then RAF Waddington. I was a civilian, but holding down a Squadron Leader's post (that would be equivalent to a Major, USAF, for goodness sake!)

As Deputy Air show Co-coordinator, operating out of the 'Battle of Britain Air show Office', RAF Finningley - the organization that ran the largest, annual, official RAF air event - I helped program some of the most exciting flying displays in Europe. A lot of things happened, both before and after that time; museum work, on staff at EGNX, the Science Museum, the British Aircraft Preservation Council, my own consultancy, and now an appointment to the WWII Foundation, based in Rhode Island.

Air Atlantique own this beauty, which is in its former British Eagle scheme. It was built by Douglas in 1958, and used to be based in Saudi Arabia. 'Air Base' is Air Atlantique's museum and pleasure flying venture. Well worth a visit.

Karlene: Now that you’re the consultant to the World War II Foundation, can you tell me what you have planned?

Ross: I am really looking forward to the anniversary of D-Day, next year. I'll be in Normandy, just behind Utah Beach, where the Foundation will have put in place a 12 foot high statue of the late Major Richard Winters, D.S.C., USA, shown in his then rank of Lieutenant, to honor not just the man, and the Airborne, but all junior officers who showed leadership on that 'Day of Days'. It will be unveiled by the former Secretary of Homeland Security, Tom Ridge. The statue is funded, the land given, but we are still seeking help with the transportation costs. Please visit the WWII Foundation's website for further details - even the smallest sum is welcomed.

Now THIS is what I call flying, the 'big brother' to the Dove (and using many Dove components). Four piston-engined airliner in the smallest package possible! Another resident at 'Air Base', Coventry, and this aircraft is a regular at UK air show. In the colours of Jersey Airways ... No, not the smelly one, the original island, off France!
Karlene: So what are you doing to prepare for the event?

Ross: I’m putting together a small ground display of WWII vehicles, and discussing with the owners of various aircraft wearing 'invasion stripes' about the possibility of a fly-over of the unveiled statue in Normandy.

Rare, beyond rare. The only complete Merchantman left. A conversion from a Vickers Vanguard airliner (as they all were), it is shown still bearing its British Airways 'class' name of 'Superb', but in the markings of Hunting Cargo Airlines. I used to see these every night on the ramp at East Midlands International Airport - in its day, a big, capable, freighter.

Karlene: So what’s going on in your personal life when you’re not organizing events?

Ross: I'm writing... furiously... on my photo-based blog 'Shortfinals' its only 50% aviation - alternate posts - as I like to attract more visitors, but the photographs are my own, and people seem to like it.

David and I (David Lee, the former Deputy Director, Imperial War Museum, Duxford Airfield), went out of our way to reach the Glenn H Curtiss Museum, Hammondsport, NY in February, this year. David was at the end of an 'around-the-world' trip when he arrived in Massachusetts, and I called 'road trip'! We spent four days in New England and New York State, running down rare aircraft (we found it helps if they have stopped flying, and the chocks are in place!) This wonderful C-46 is at the Curtiss Museum, and shows the portly, yet handsome, lines of this breed (As you might gather, I am ideal for re-incarnation as a Commando, in the next life!). I happen to like the Commando immensely.

Karlene: I like the blog, and the name too. Can you tell me where you came up with it?

Ross: Why 'Shortfinals'? Well, I'm no Spring chicken, but, who knows, I may yet advance the throttles, and try for another circuit. After all, it really comes as a shock when you find aircraft that you have flown in, being exhibited in a museum. For example, the lovely G-AGOH, the pre-production Auster Autocrat, owned by Leicestershire Museum Service, has now been on display in TWO museums!

Thank you for sharing your passion of these beautiful old birds, and your amazing career. I know your Normandy Event will be a great success. For anyone who wants to participate, please visit the WWII Foundation's website.