How do you build a golf course? 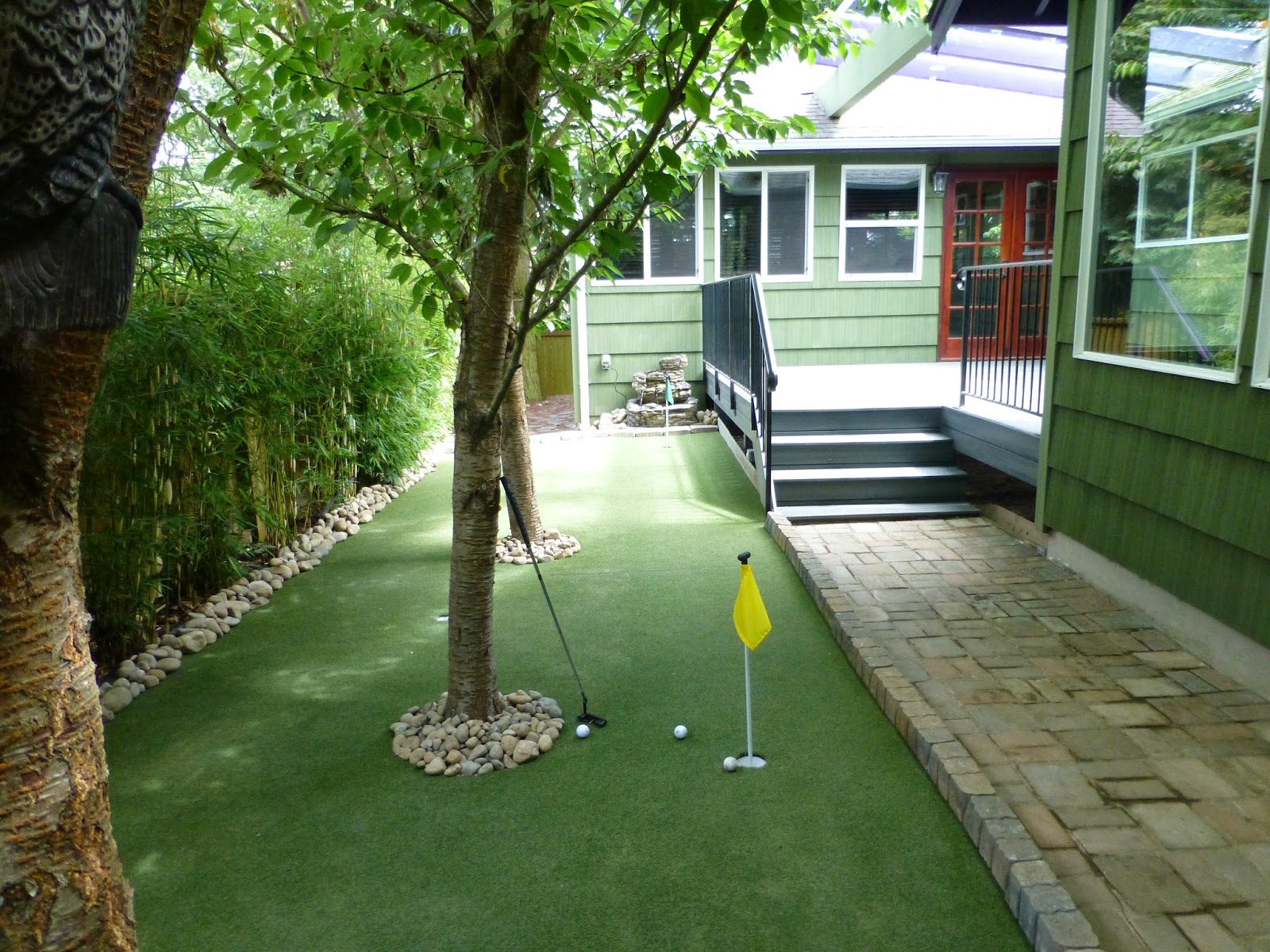 Have a vision.
Get committed: Buy turf, cups and flags.
And follow through.

Lots of little helpers at the beginning of the project to dig the dirt and move rocks are a great help too. 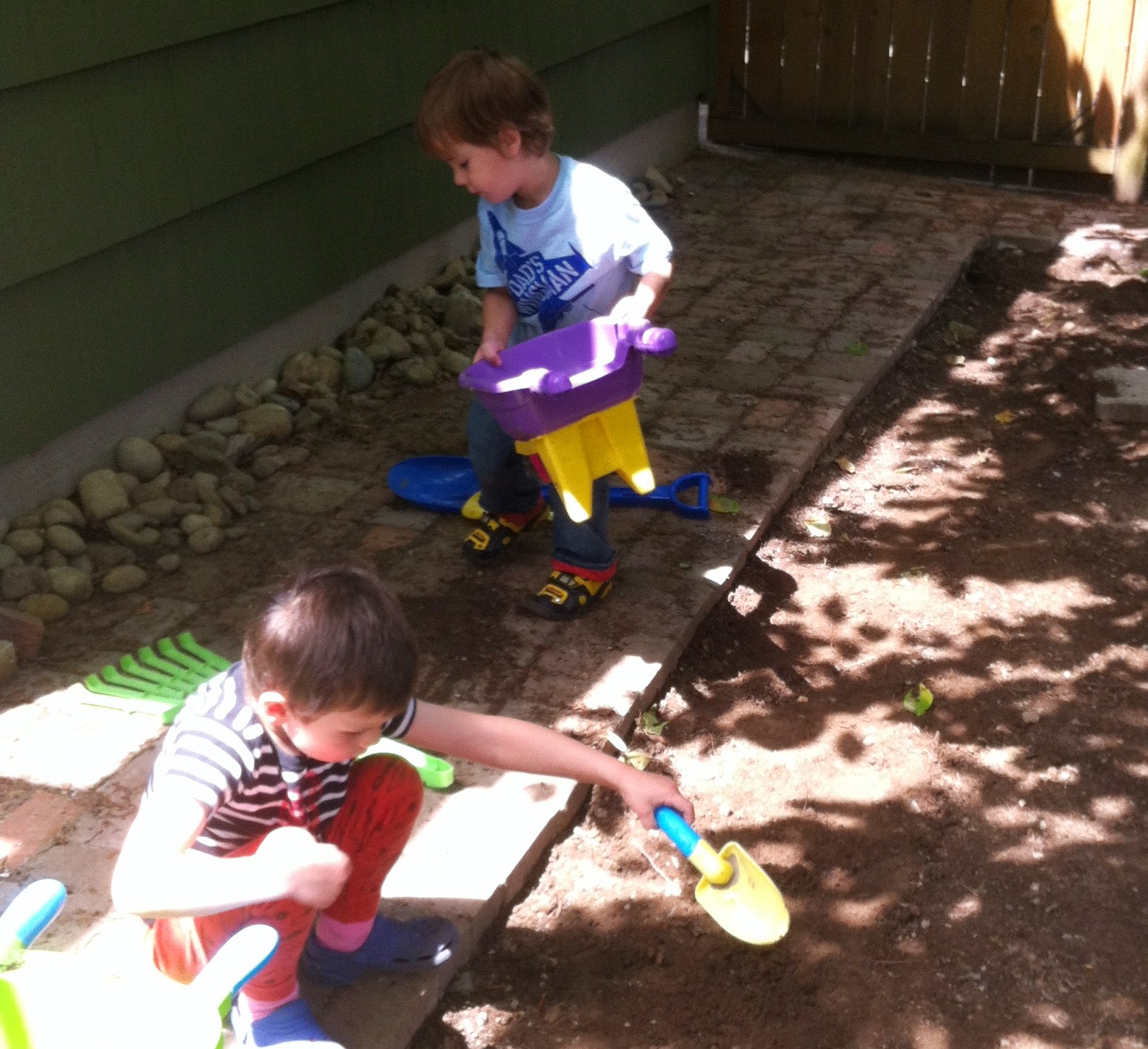 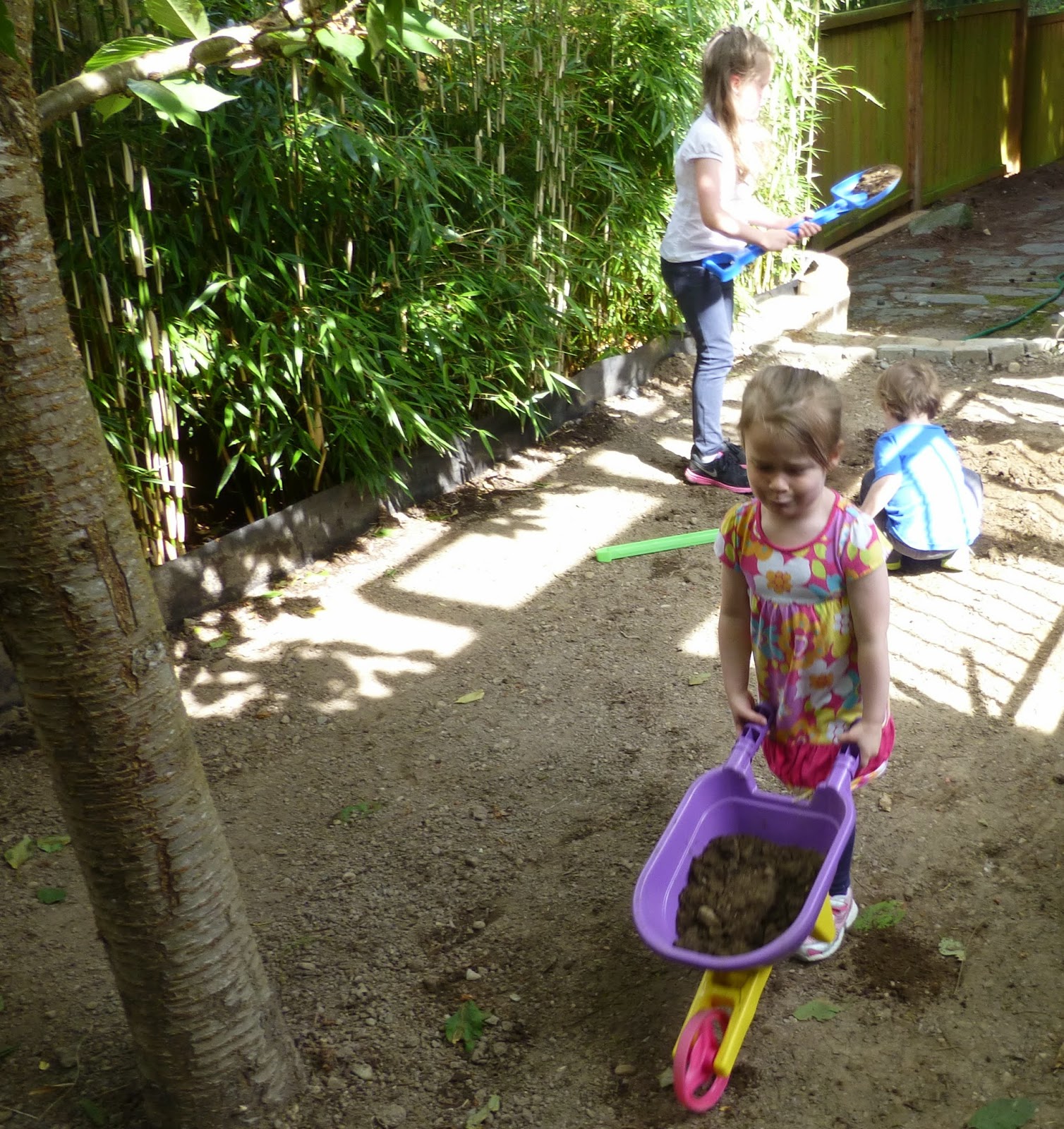 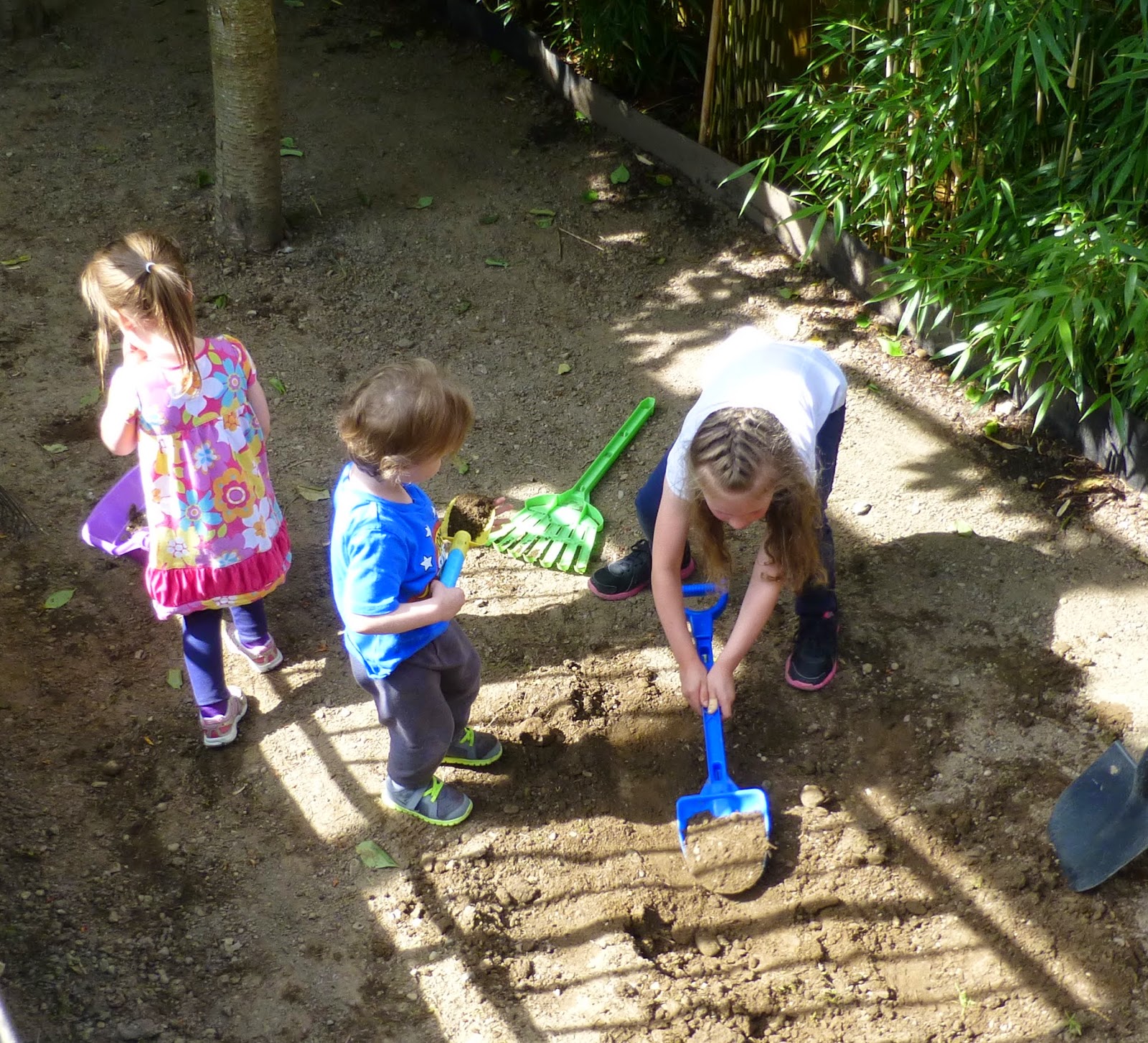 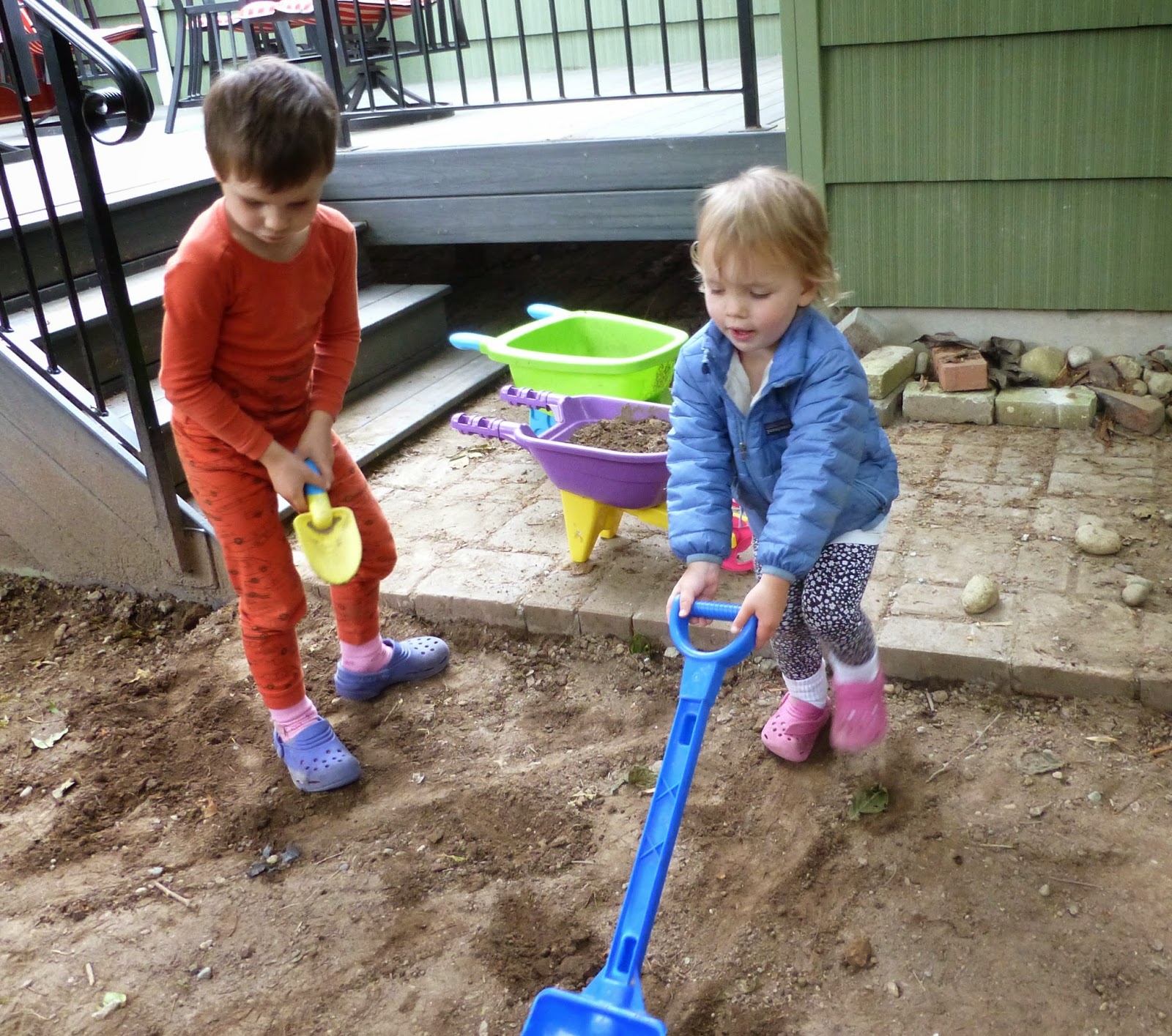 Ground preparation is essential. I thought that water would flow through the turf. But the turf is solid rubber on the back and you don't want water to soak in. Thus the ground needs to have a bit of a slope so the water will run off. That could be a challenge depending upon your yard. I'm waiting to see where the pond will develop after our first rain. 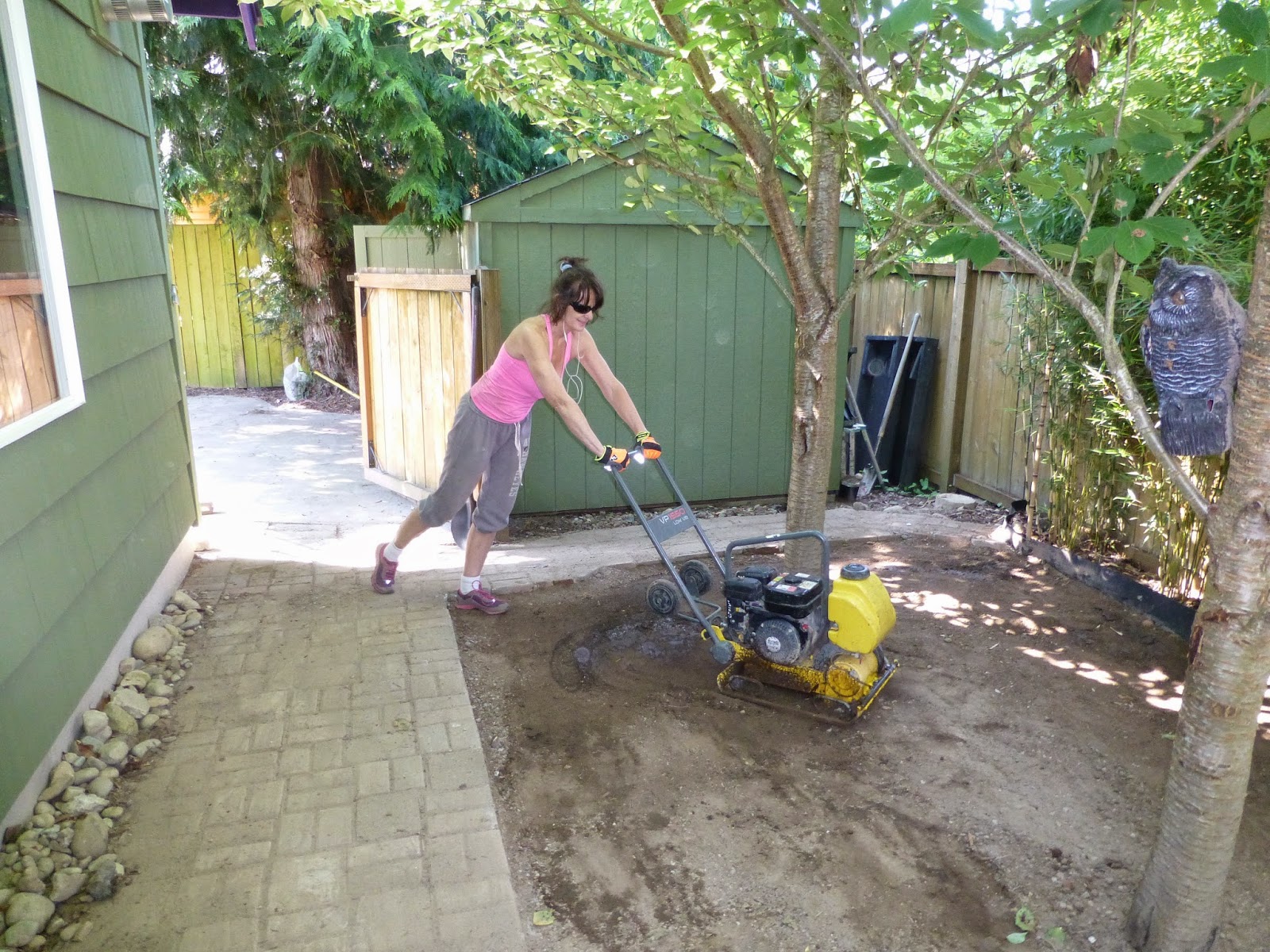 Rent a tamper to pound that dirt into place. 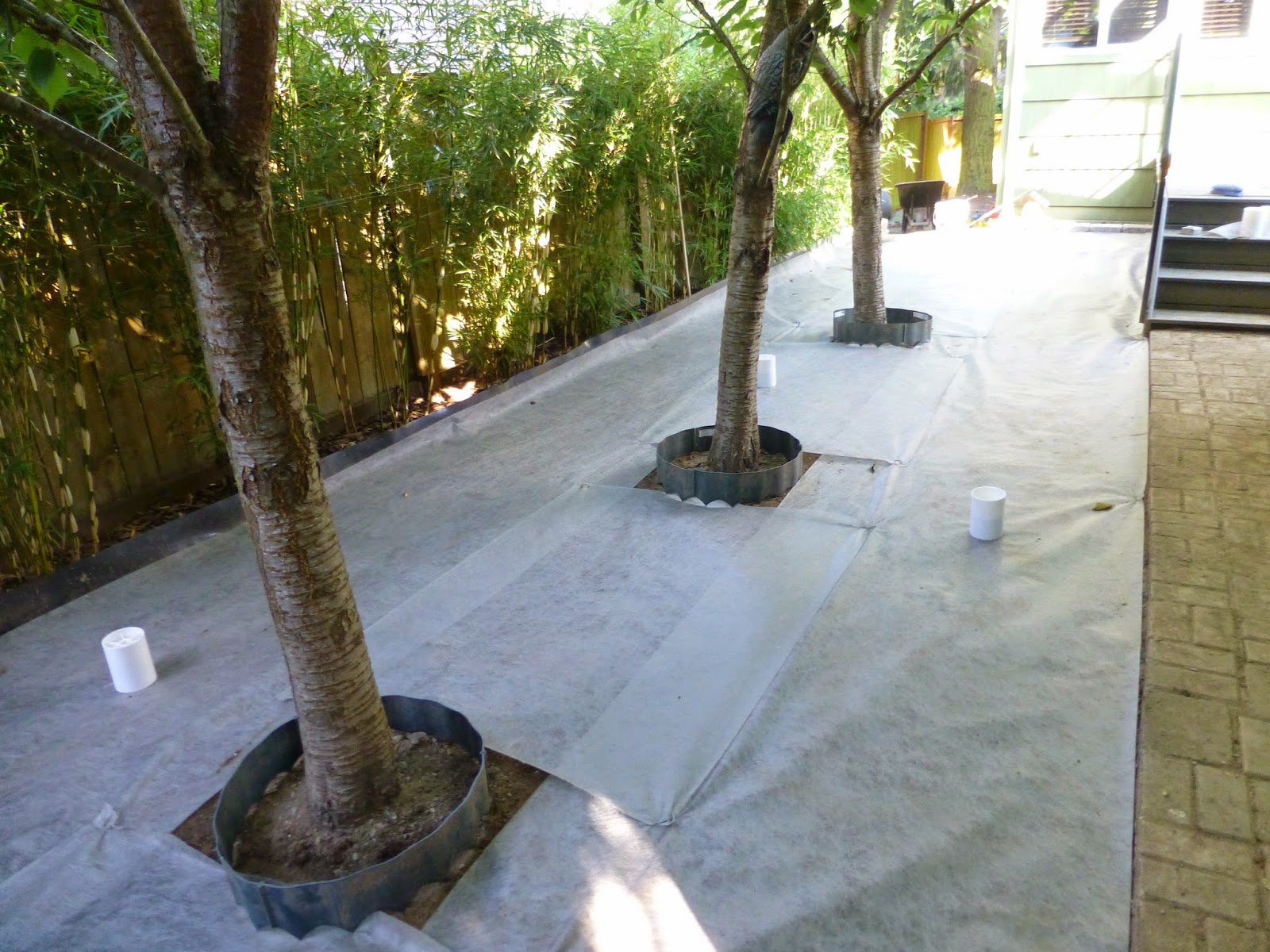 Cover the ground with weed cover. Pay the money and get the most expensive paper... worth the weight in gold to not rip when you're running over it with a wheelbarrow. 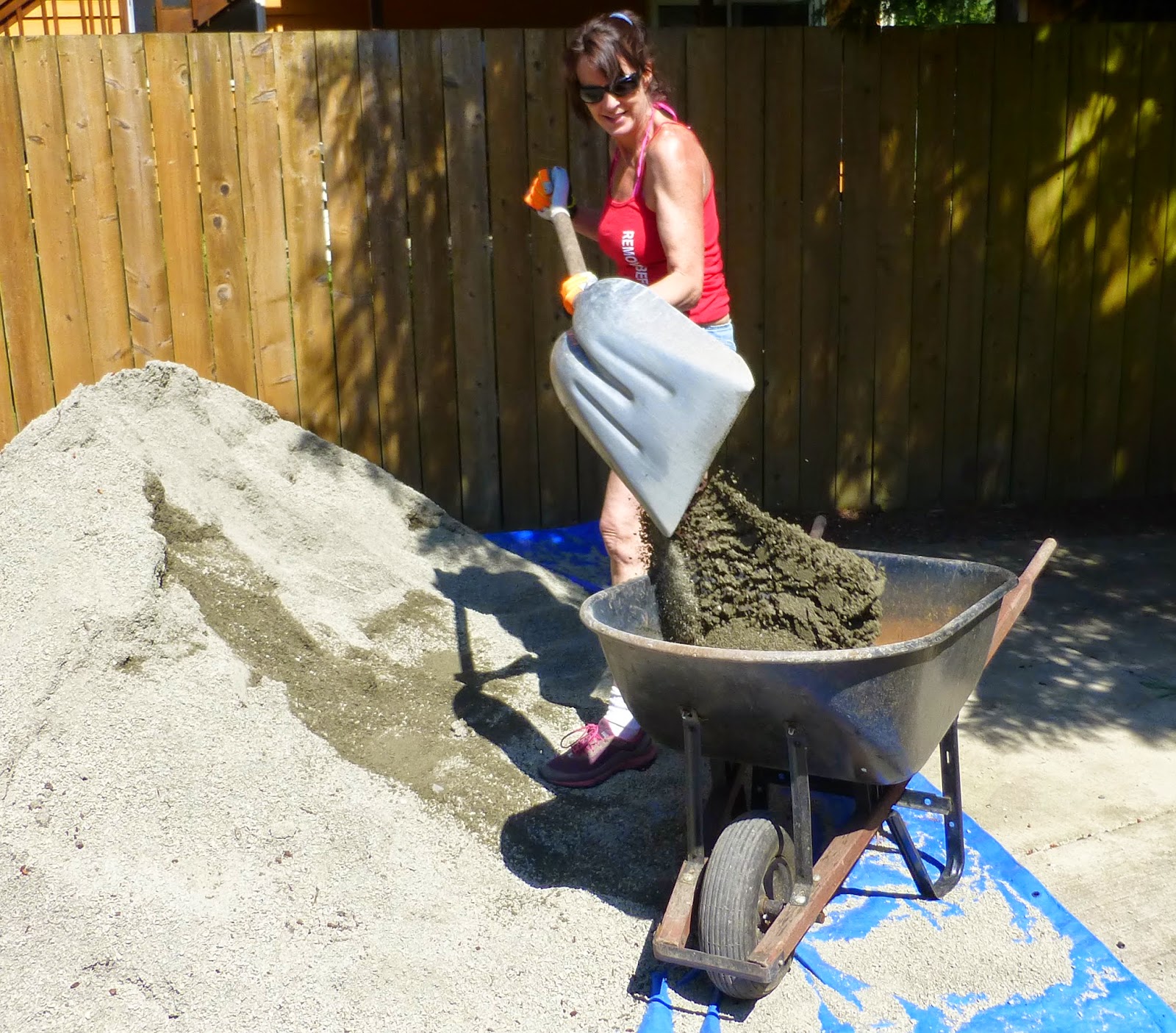 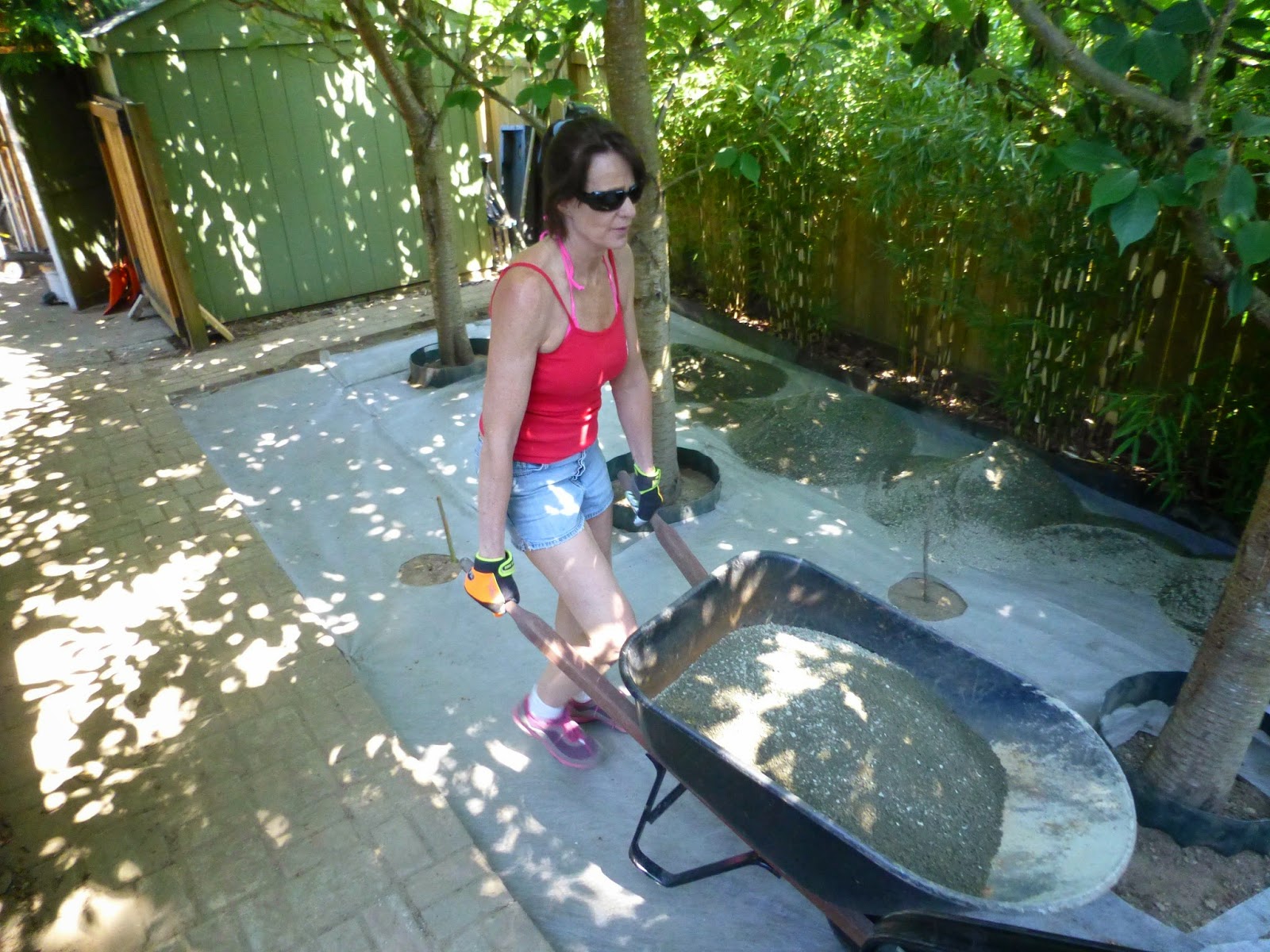 Build a boarder to hold the rock. Then you'll need 3-4 inches of crushed rock over the entire surface tamped down to the feel of cement. I brought in 3.5 yards. 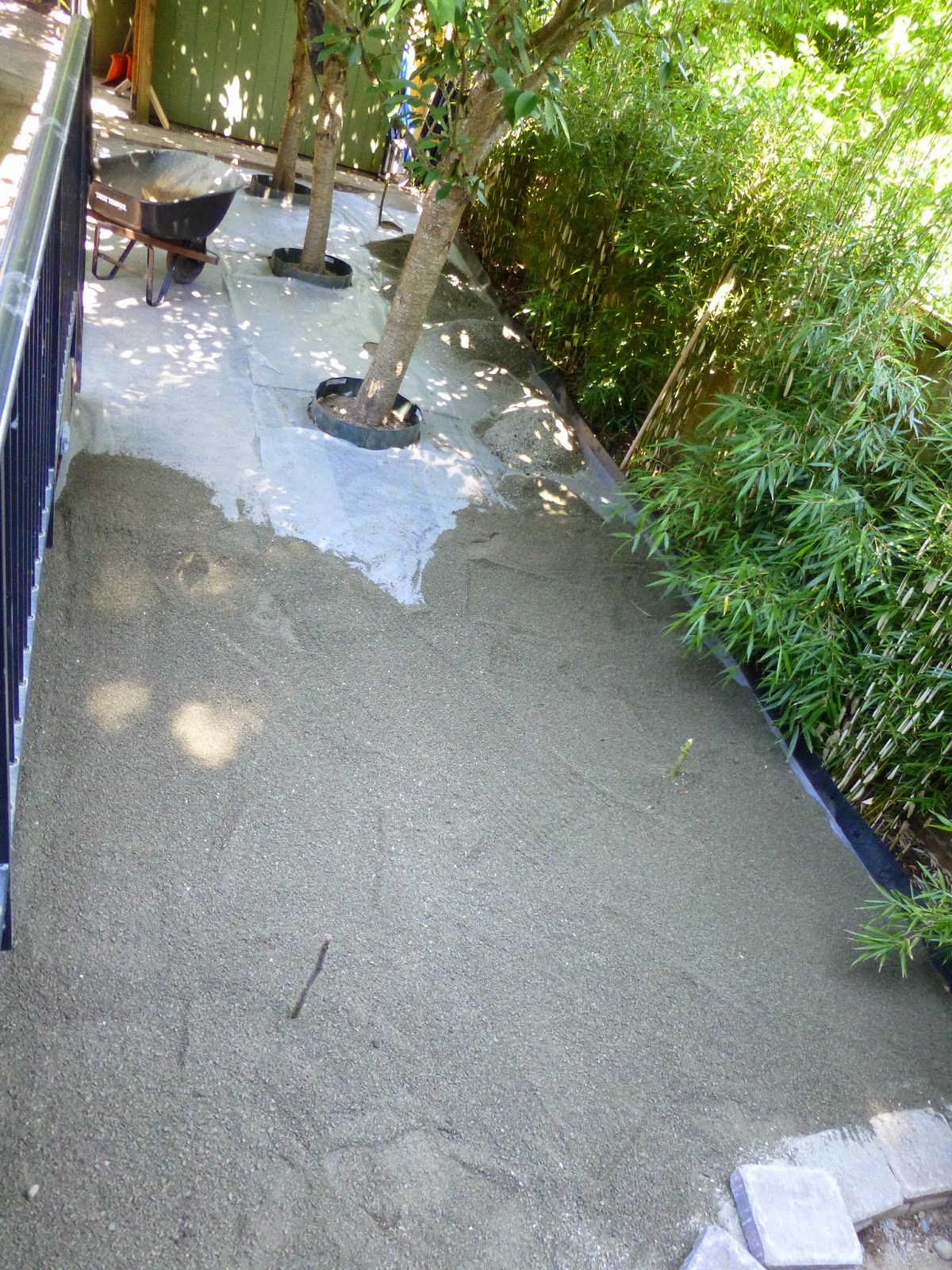 Then you dig the holes for your cups. Place the cups in and cement them. Fill around them with more crushed rock. Missed the photo shoot on that one... 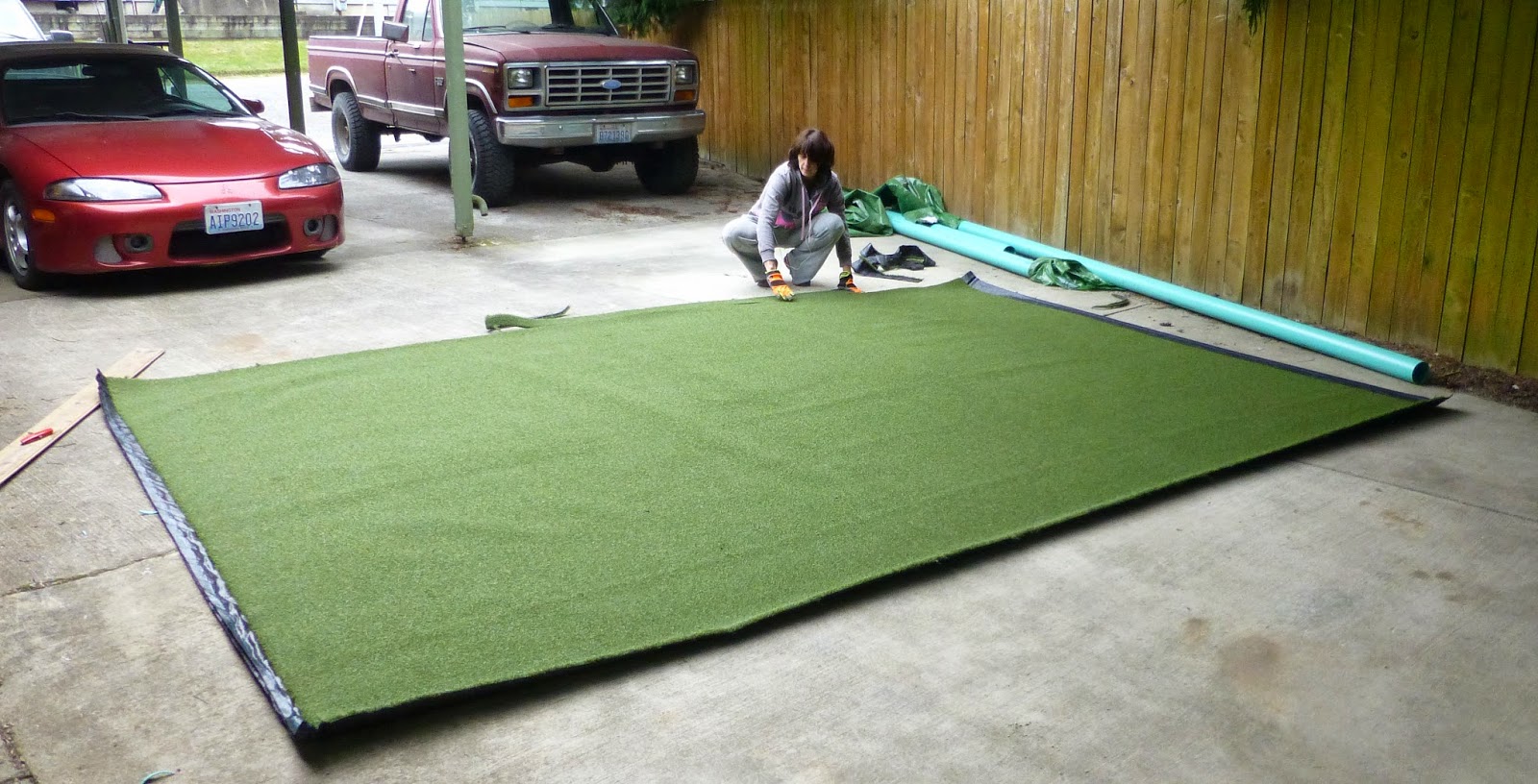 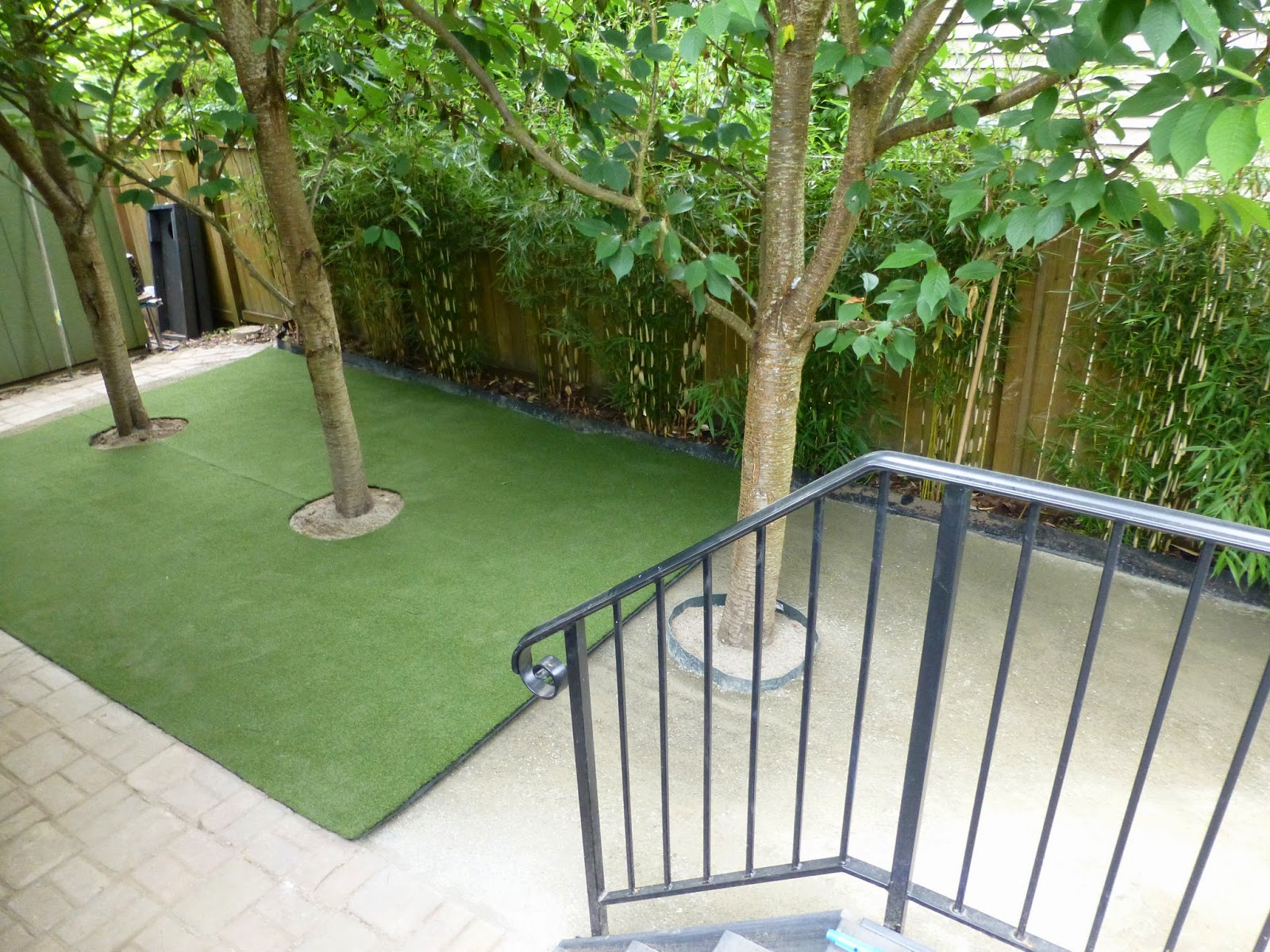 Cut and place your turf down. You will glue the pieces together. Make sure the grain goes the same way. 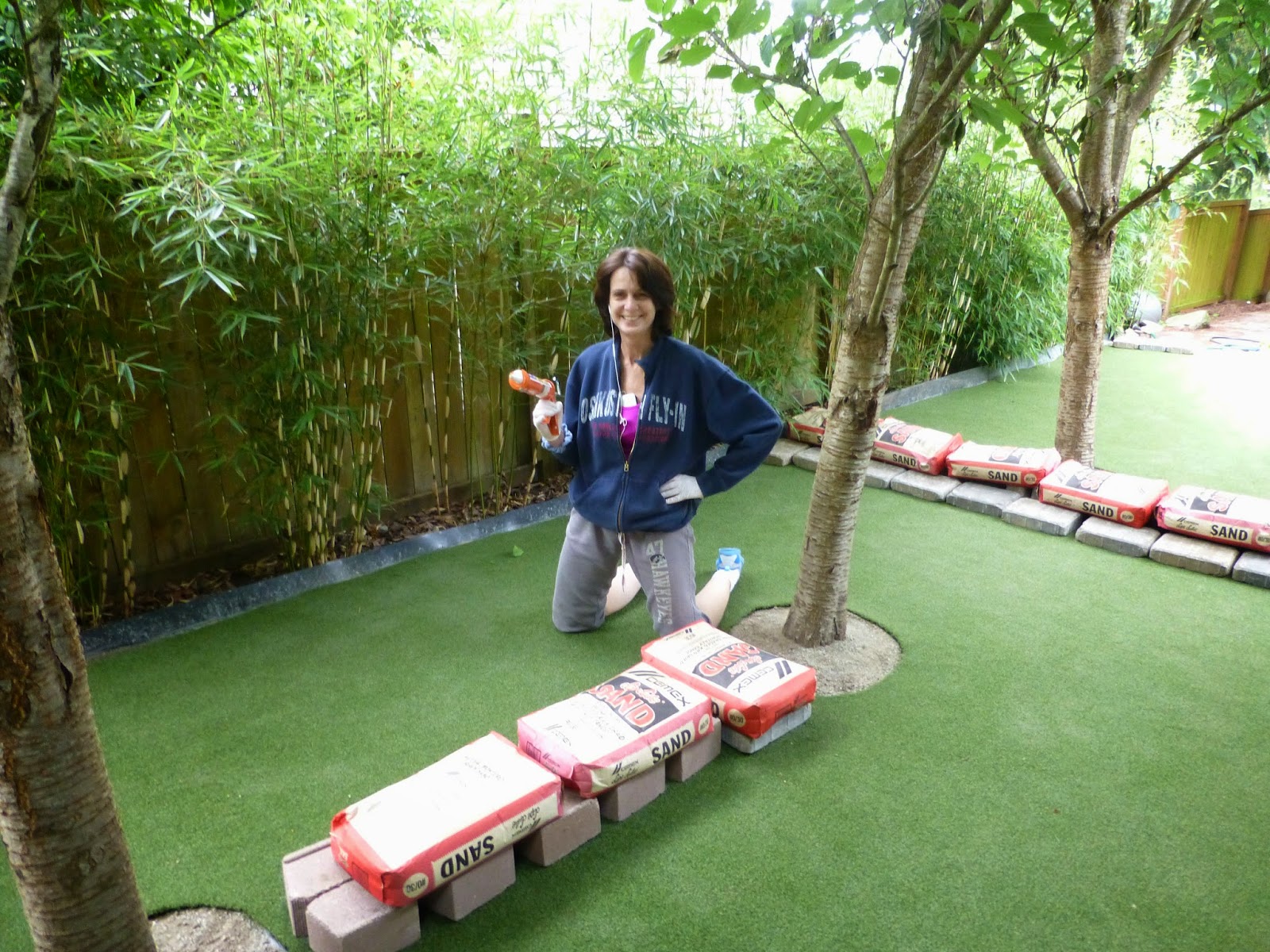 Then you cover the turf with sand. The sand is use to hold the turf down. Make sure you get tan color and super fine. 800 lbs on a 300 square foot surface. I used a spreader and evenly spread 50 lbs at a time and brushed into the turf. 16 bags later... I was done... until the hard part. 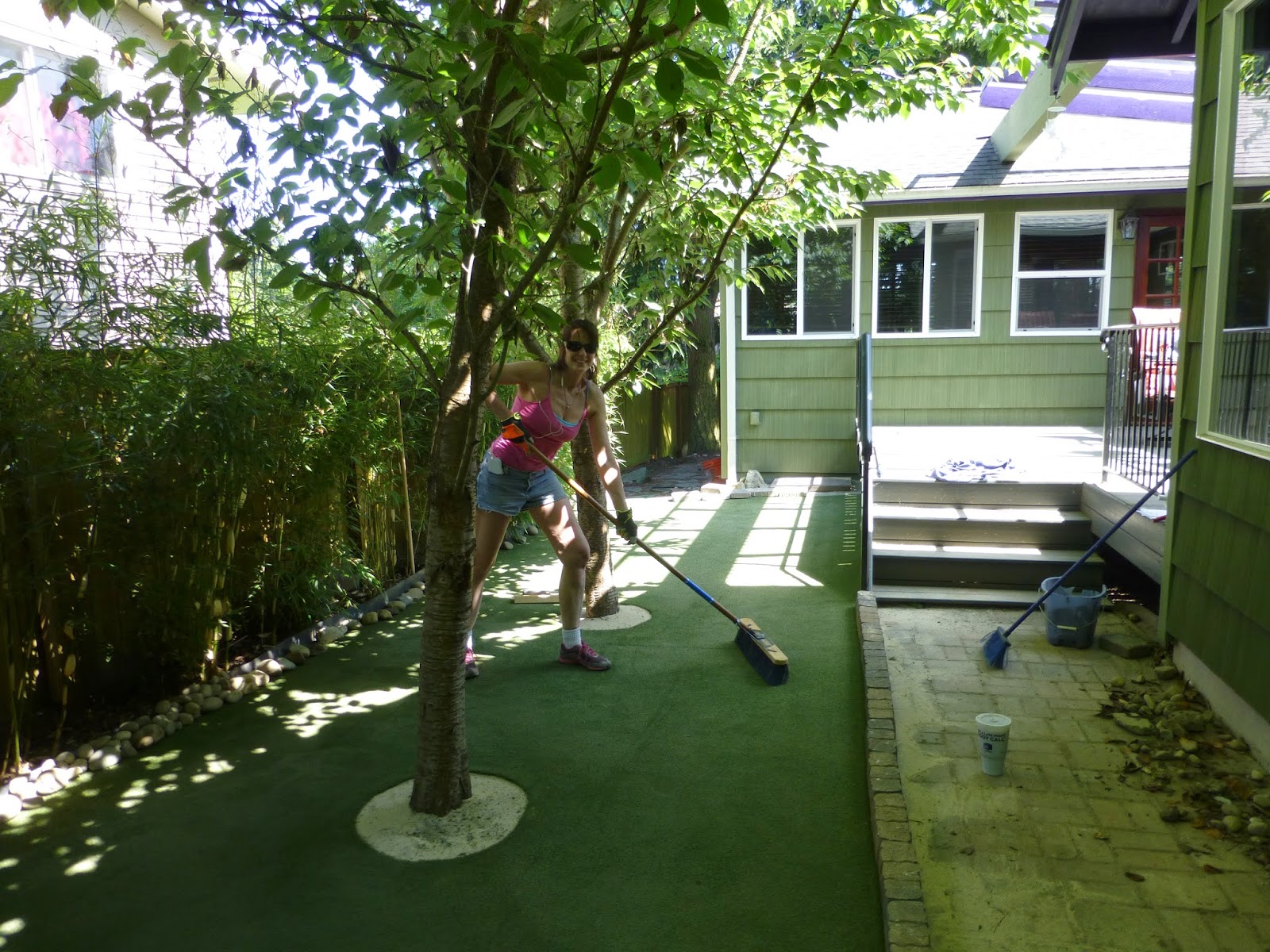 Cutting the holes was my challenge, and the last thing you do. I used the shop vac to suck the sand out of the turf where the holes would be cut. That made it much easier than cutting through sand and turf. 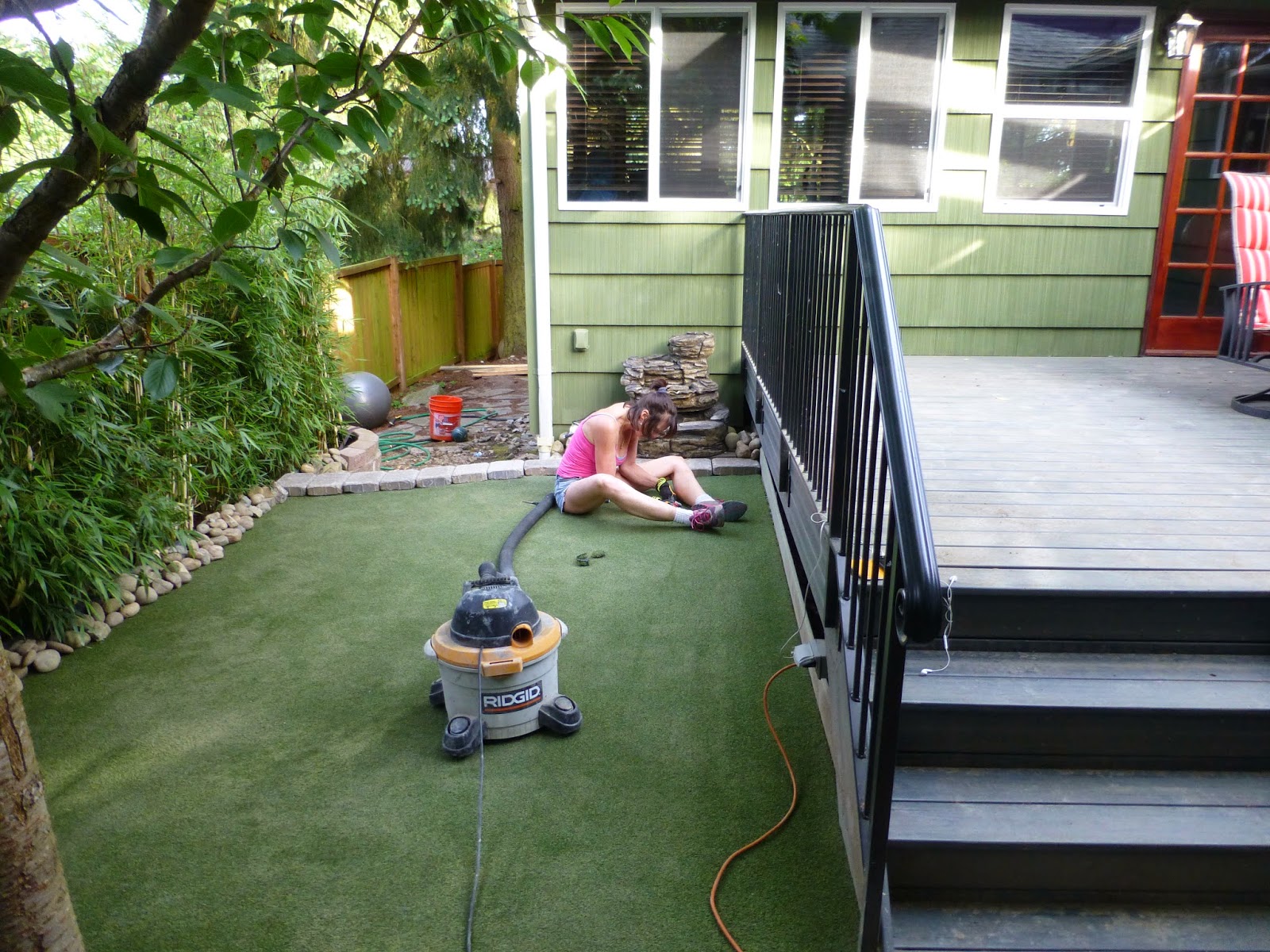 Then I moved my rocks to make a rock wall, and added a fountain and she was done. 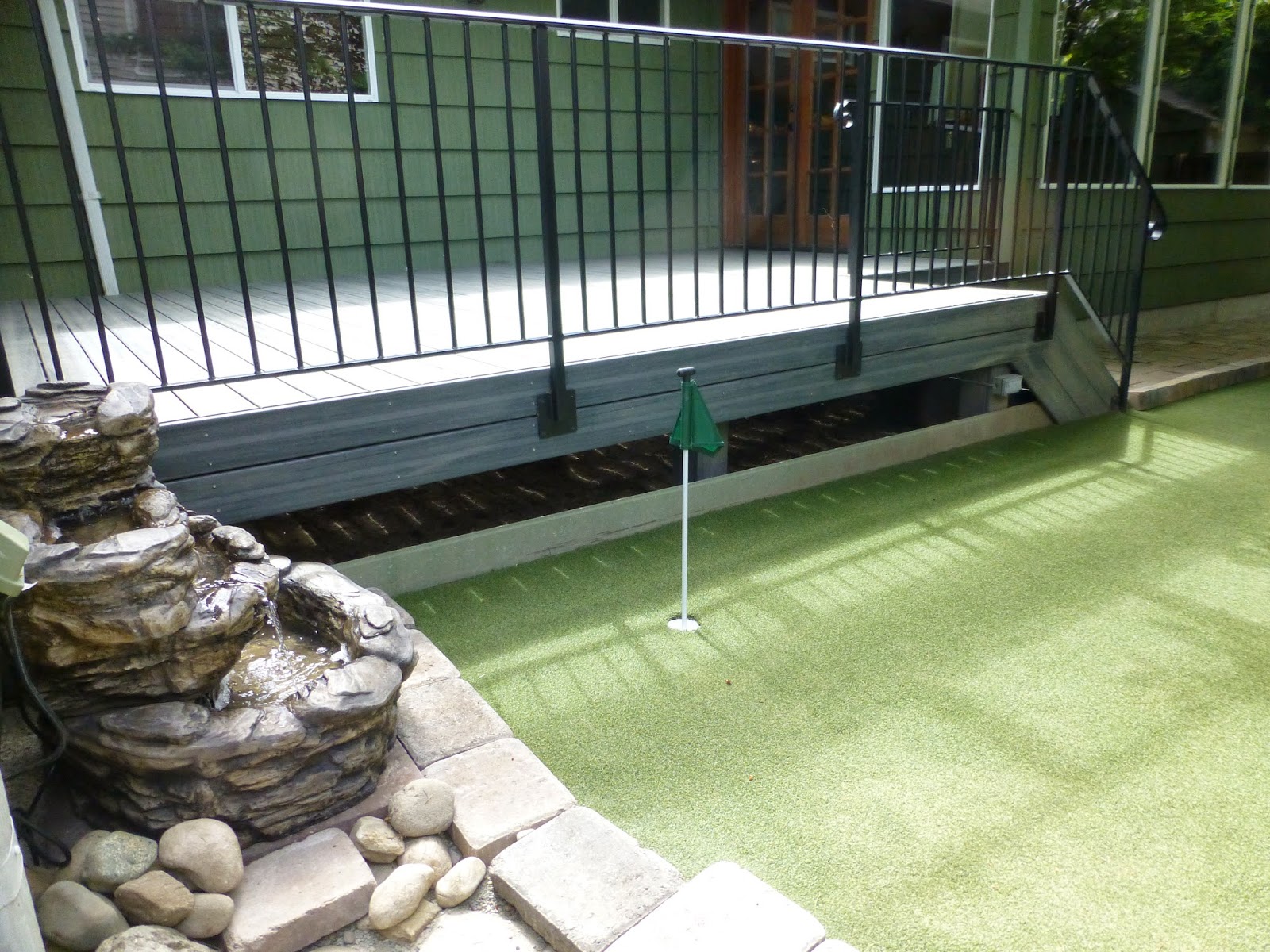 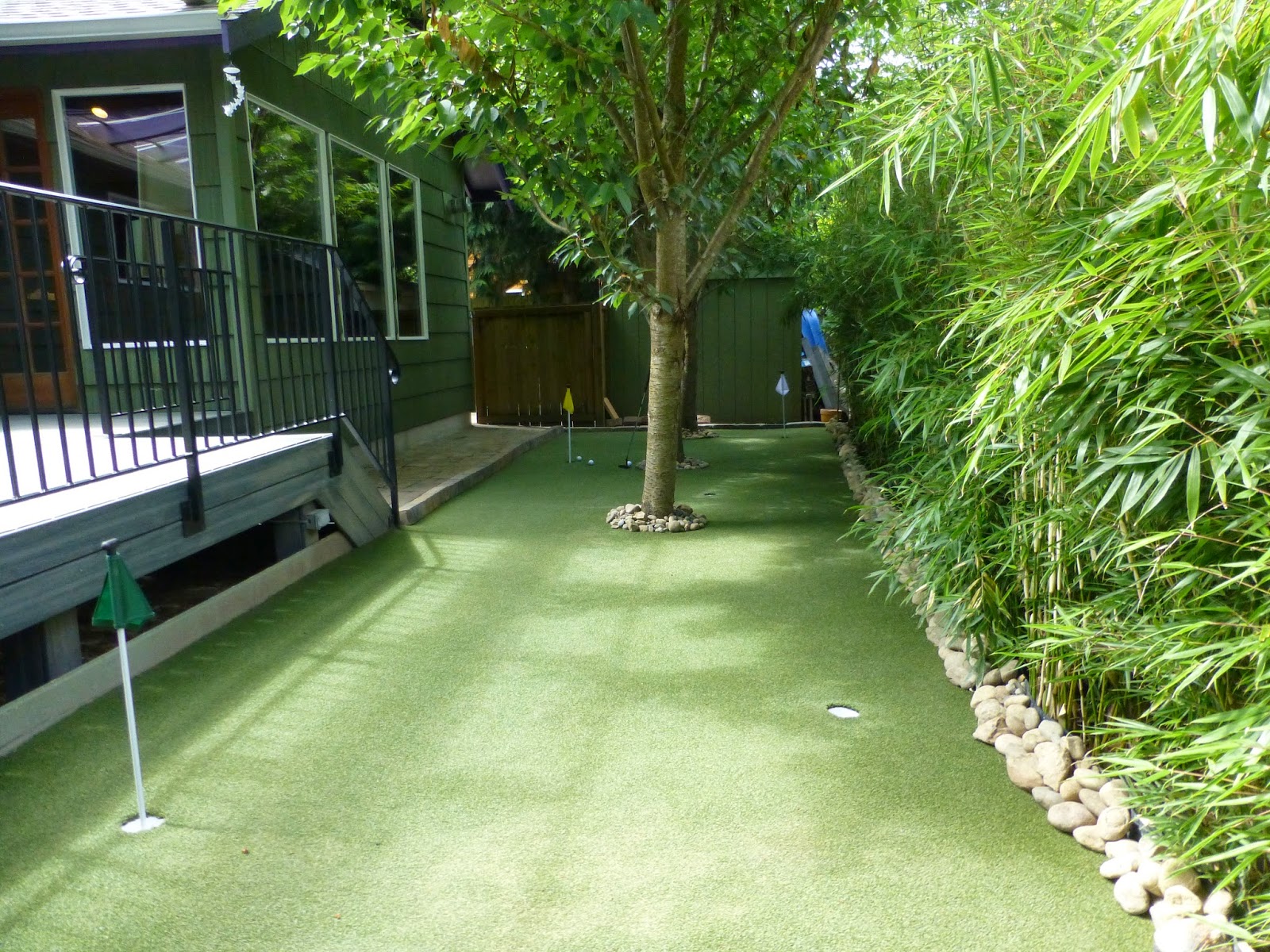 He will give you the best deal on the turf and his support during the project phenomenal. He even gave me his cell phone if I needed him. It's nice when you get into a project like this to have someone to talk to. When I was going to buy 9 cups, he said it would be too busy. I bought 7 and used 5. I also bought 3 flags and he is sending me two more in exchange for photos. 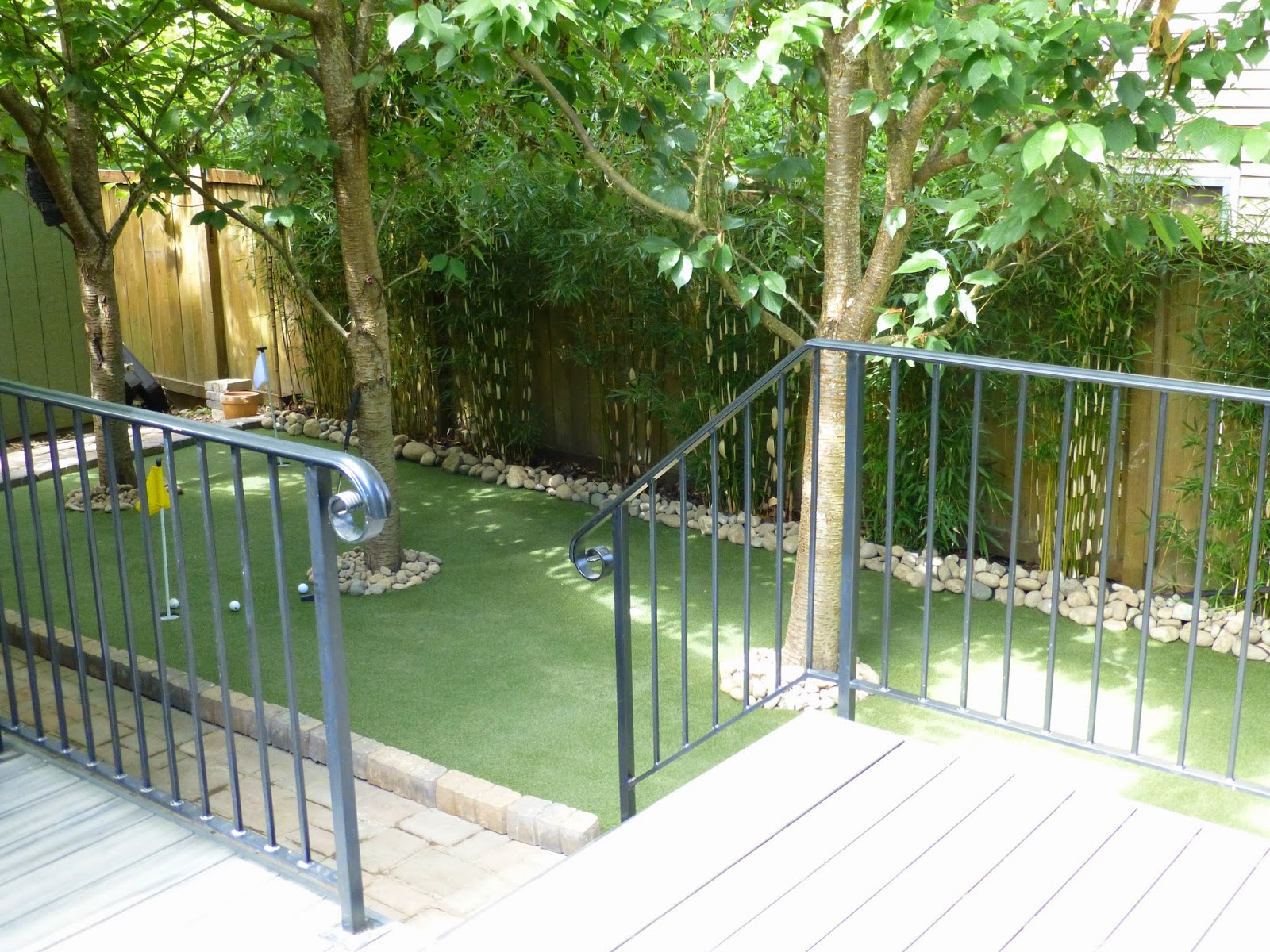 Reward yourself when you're done!


I bought myself a new patio table for my prize. But seriously... doing this was the prize itself. So yesterday I cleaned my deck, stood on my roof and washed the glass over my deck, and my little yard is done. 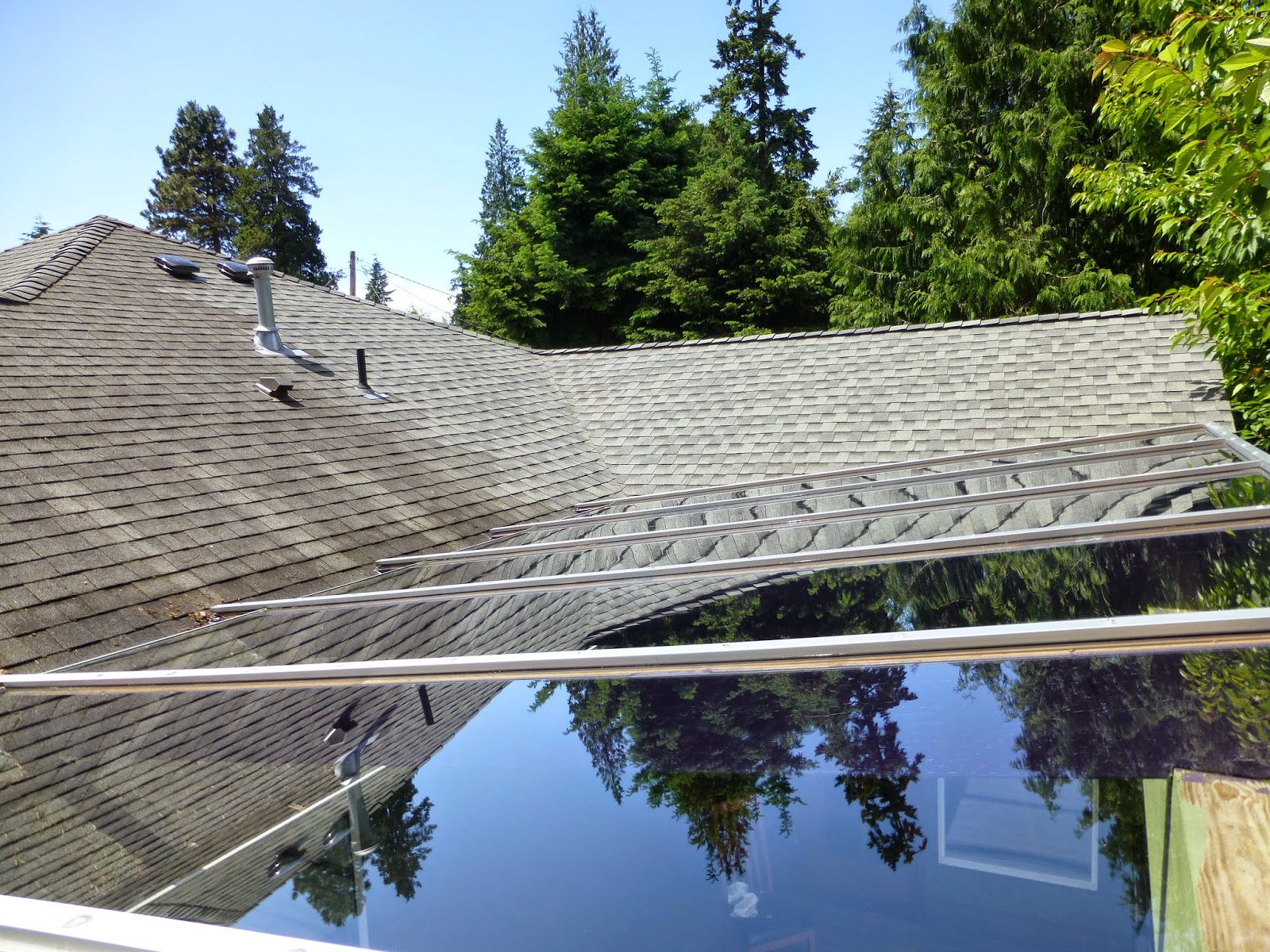 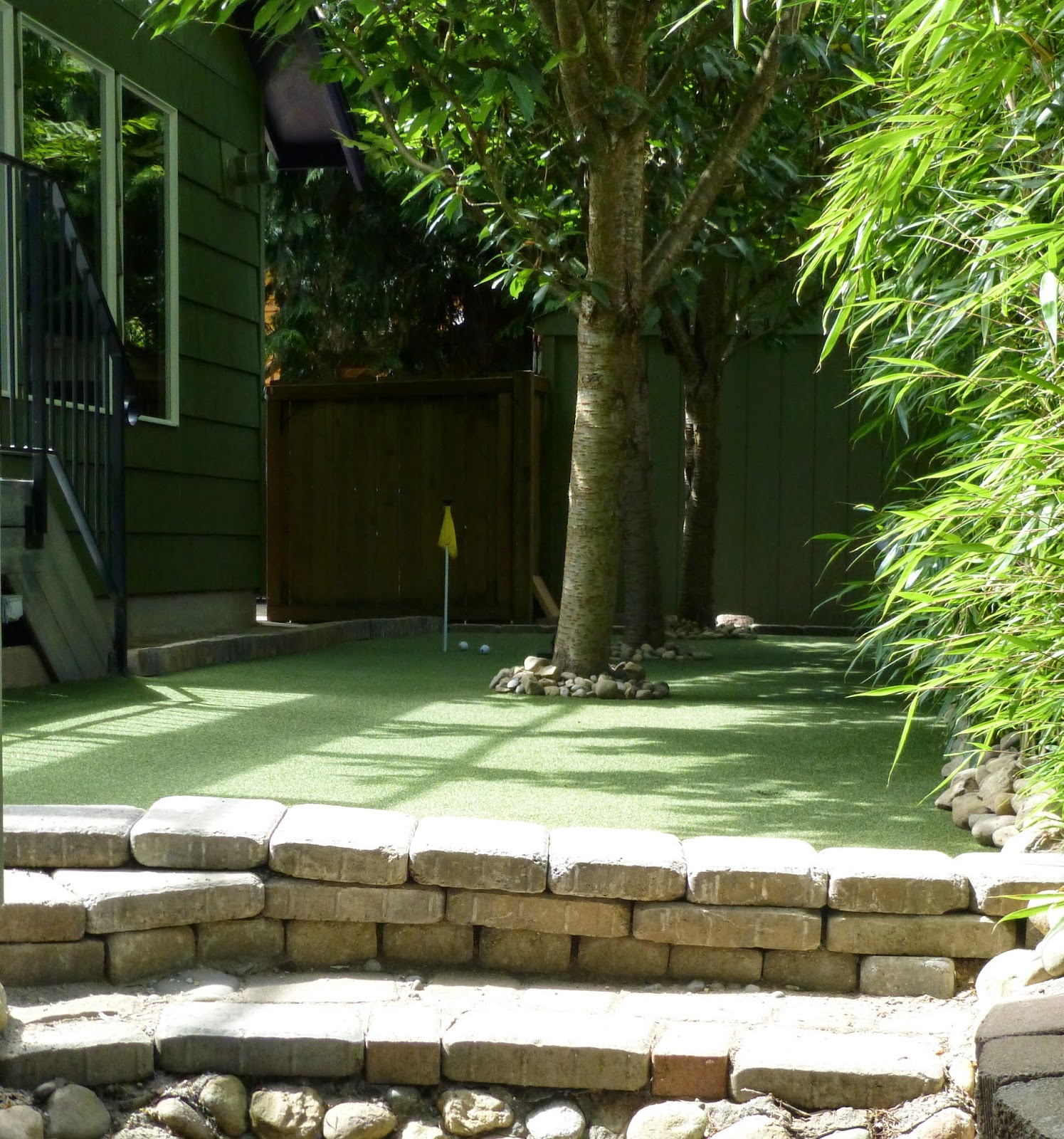 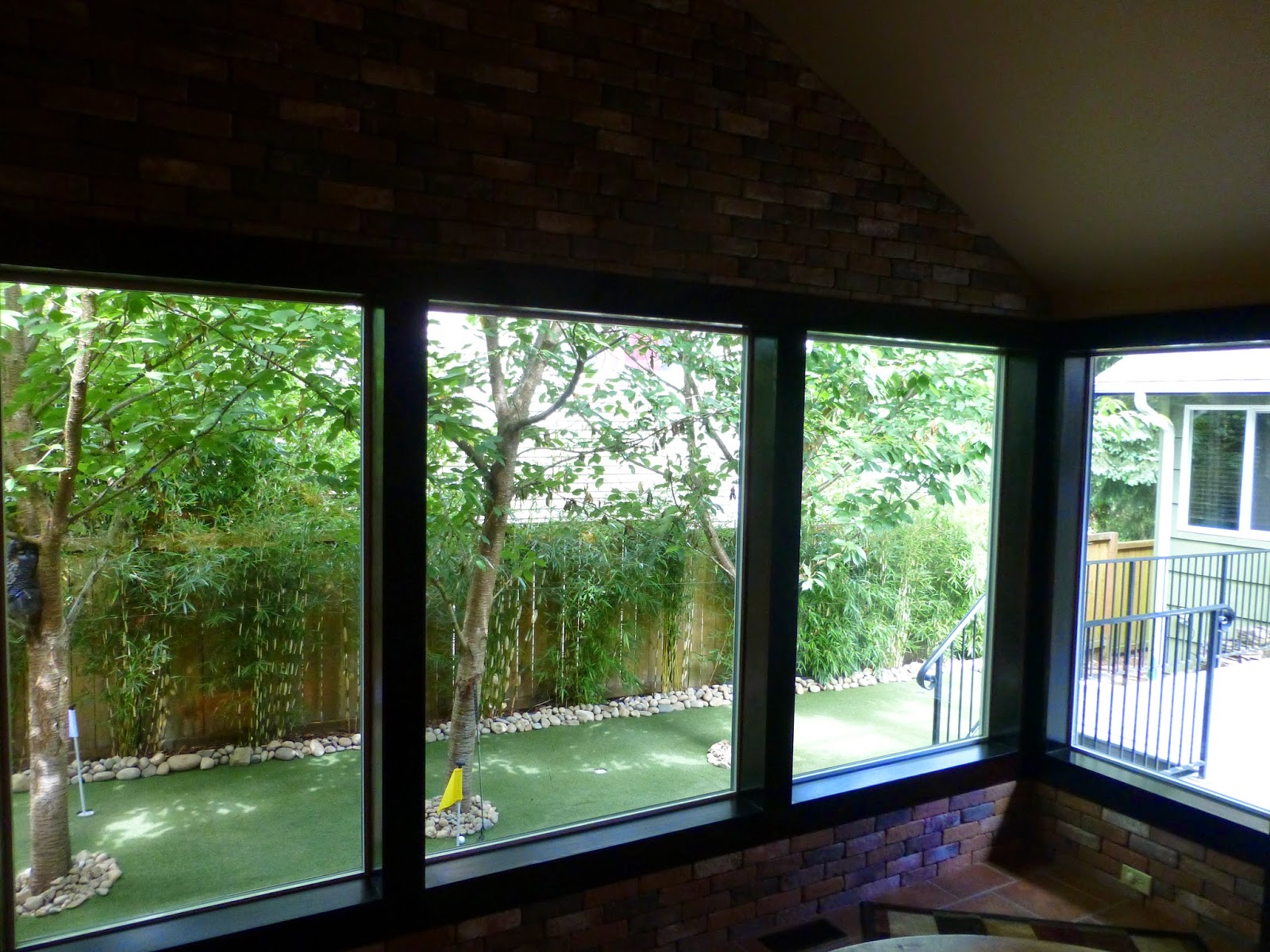 Today I'm off to SLC and then to Paris. No time to play on the course... but I'm sure it will be used while I'm away.

Author of Flight For Control and Flight For Safety,
If you haven't read them...it's time!
Posted by Karlene Petitt at 12:00 AM