I received emails concerning the airbus often... this is one such comment that was worth discussing... again.

Fact or Fiction on the Airbus? 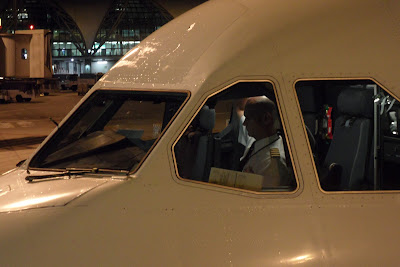 "The bus is a bit tricky in a cross wind landing or gusty conditions. This isn't the joystick's fault, but the fly by wire is slower than humans to react to pitch & roll excursions. It also changes control laws in the flare, adding to the fun.

Just try to remember that Fifi is trying to maintain the last attitude you had dialed in but has a lazy way of responding to the bumps. The closer you are to the ground the less willing you are to trust her!

It takes time to not stir the pot, but it can be learned.  As for the stick itself, it is great.
No yoke to hit your knees on, and gives room for the most civilized thing the French ever did, putting a tray table in front of the drivers.

Feedback? None, you are fighting a spring, like a computer joystick.
Only your joystick moves, so no "following the other guy through" on the controls.

Autotrim?  Yes, up to 30 degrees bank and to the pitch limits for the phase you are in.
The bus will hold the load factor and roll rate you input, up to the limits of the computers.
The less you touch the stick, the better off you are in most cases."

The stick is not really the mystery or challenge that one might think. The stick has nothing to do with the computer logic of the plane. The stick is only the method of telling the plane what we want to do, not how to do it.

A Check Airman's thoughts
and Tips on Landing:

Only the pitch law is changed below 100 feet, not all flight control laws.

For best results at 50 feet squeeze in enough rudder to align with the runway and only enough bank to counter drift (remember sidestick is roll rate not aileron!) aileron is added automatically to keep the bank.  Takes more rudder and less bank than most expect.

After touchdown, put in a little upwind stick to keep that wing down (it's direct control now).

I've done 50 knot xwinds in the sim like this non problem...

For strong crosswinds, consider the longitudinal pivot point is 100 feet behind you. You may need to put your seat on the upwind side a little so that you're  on the centerline after the de-crab.

So there you have it.

More on the bus to come.
Enjoy the Journey!
XO Karlene
Posted by Karlene Petitt at 12:00 AM