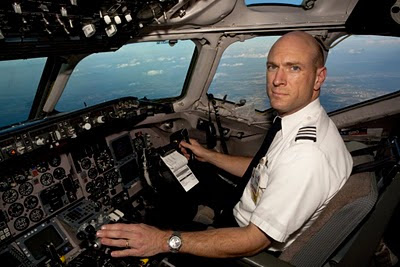 Nathan Carriker, "Nate" is a commercial airline pilot, family man, an author... and a miracle! Nate attacks life with passion and humor, and has accomplished miracles in his life. I have a feeling there are few more out there for him.
Nate the Pilot:

As Nate tells it, “I was just another little boy obsessed with airplanes, thanks to the old TV show, Black Sheep Squadron, until my dad ignored the bills for a few months and learned to fly before I turned 9.” However, I know Nate’s passion for aviation reaches far deeper than the television show. Word is... he is still a "cowboy." 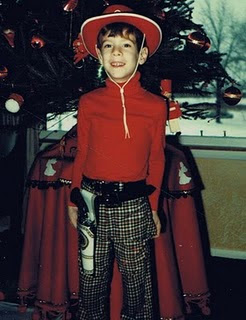 Thanks to Nate’s dad having his priorities in focus… Nate accumulated over 200 hours flying with his dad within the next seven years. 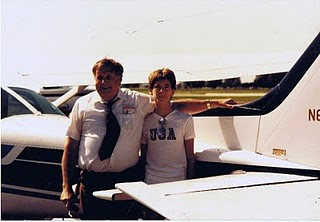 Instructor and Nate after "God knows how many landings" at KOSU on an AOPA Pinch Hitter course. Ready to solo after a couple hours... but at 14, not rebellious enough to break FARs.

Nate began working after school, soloed at 16, earned his private license on his 17th birthday and was a CFI-I by the time he turned 18. He instructed part time at his alma mater, University of Central Missouri, until graduation at the age of 20, at which time he took a job with Air Midwest, just prior to the purchase by Mesa. Despite his love/hate relationship between the Metroliner II (love) and Beech 1900C (hate), he soon found himself moving to SkyWest in search of a brighter future. This time on a Metroliner III, and soon was able to bid up to the EMB-120 Brasilia… and a long time favorite. 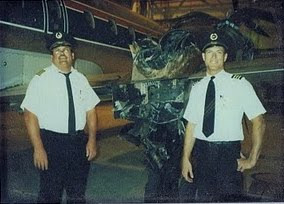 December 14, 1994 Nate tells me he made the mistake of his life, which should have ended his life. He was flying at a low altitude through the Martinez Canyon, 20 miles southeast of Palm Springs in his father's American AA1 Yankee. He was unable to climb out of the canyons floor, and in the ensuing crash sustained spinal fracture and cord injury that instantly paralyzed him.

"Yankee" The airplane that Nate killed 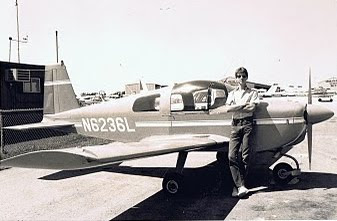 IFR, Commercial, and CFI training complete... And he misses her every day!

His survival and ability to fly again are nothing short of a miracle, and Nate is filled with gratitude.

“Thanks to my then-roommates Jim Bixby and Peter Barbin, also SkyWest pilots, I was rescued the next morning,
and thanks to dozens of incredibly caring people at SkyWest, Desert Hospital, and Loma Linda University Medical Center, I recovered almost completely, and returned to the line a year later, to the day.”

Happy Holidays from the Hospital 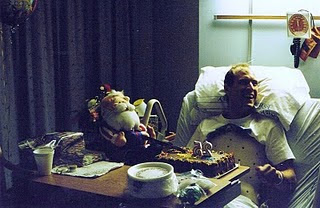 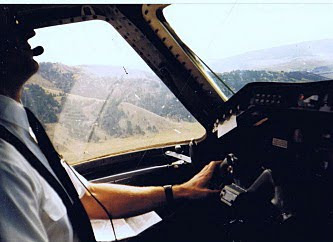 Captain for 8 months Approach to Jackson WY, last flight and then off to AA (The airline)

In less than 3 years Nate was hired by American Airlines as a 728 FE in Miami, soon moved to the 767 in New York, bid MD80 in Chicago, off to Detroit, back to Chicago, five years in St. Louis, spent a 9 month flirtation with the 737, before he journeyed back in Miami where he currently flies the 767. The life a pilot.

Nate met his wife just before he was hired by American Airlines, and they have lived in Springfield, Missouri and have never moved because their family is centered there. He and his wife have a 9-year-old son together Reagan, and two sons from his wife’s previous marriage, the older son, Christopher, is a U.S. soldier currently stateside, and the younger son, Justin, is a college student in the Missouri National Guard, and Army ROTC. 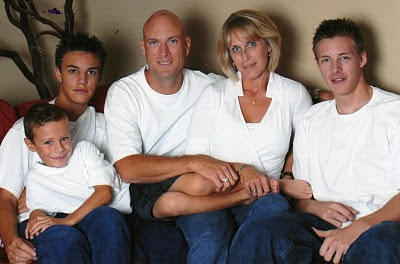 Nate bought a 1966 Mooney M20C in 2000 to share with his dad… the least he could do after crashing dad’s plane. But unfortunately he had to sell it when the pay cuts came in 2003. 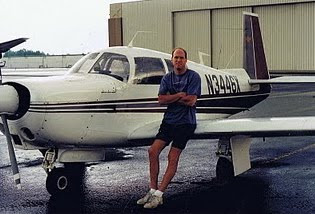 Mooney fun... while it lasted 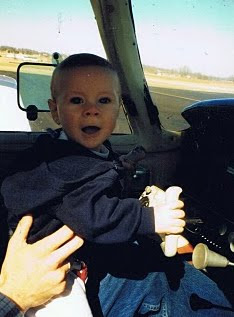 Reagan in a Mooney... but first flight was in an Eagle Saab 340

"Mini-me" was named after the last President of the United States and the man whose aircraft have had the greatest effect for good in the history of aviation. He has a lot to live up to, and I know I'm biased, but I think he's got it in him - Reagan Douglas Carriker. He's got about ten hours right now and can do a pretty decent job of flying for somebody that low-time who has to choose between seeing over the nose or being able to push the rudder pedals in a 150."

Nate started writing shortly after 9/11 as a form of therapy. As with most pilots this day significantly impacted him.

“As a lifelong pilot, that day gouged a wound in me as deep as if I'd been married to one of the victims. The idea that someone could use an airliner full of innocents as a weapon to kill other innocents is still so profoundly perverse and evil to me, I still haven't been able to wrap my mental or emotional arms around it. It's like someone came into my Church, relieved themselves on the altar, killed the people inside, and walked out laughing.” Something wonderful came out of Nate’s therapy... a novel.

A Silver Ring is a multi-generational family saga, inspired by Nate’s family of aviators, more specifically his Uncle Rudy, a bomber, engineer who was killed in air combat in 1944.

“I've always had what I call a reincarnation "fantasy" - not a belief, just a "what if" kind of fun thought - that I might really be him, here to live the life the war took from him. Flying is as much an identity trait in my family as blue green eyes, and I revel in the knowledge that I'm doing exactly what I'm here to do. I don't mean that like I'm God's gift to aviation or anything - I still prang 'em on once in a while like anyone does, and I nearly killed myself in a small plane in 1994. It's more like the opposite - Aviation's been God's gift to me. Of all the ways people make their way in this world, this is the one, the only one, that I ever considered. If I didn't have Flying, I really don't think I'd have made it. If I did, I'd probably be living in an appliance box somewhere right now.

When you take into account that both my dad and his brother did it, though thirty years apart, and that my grandfather and all the previous generations never had the option, it comes through pretty clear to me. It's kind of funny, too, because our name, Carriker, was originally the German surname Karcher from the middle ages. Karchers were essentially medieval (when will I learn how to spell that?) truckers. They took stuff from place to place in carts. I love driving anything, and the bigger and/or faster, or more complex, the better. So I can't say I'm advancing my family's status in the world by being a pilot, but no one can say I didn't heed the call!”


A Silver Ring began as a trilogy in 2002, but Nate was told he’d be crazy for a multi-book deal with protagonists dropping like flies for a debut. So he combined his works of art into a 160,000 word novel, and set it aside while he worked on another project… the story of his journey from paralysis to flying. Nate finally took the plunge and attended a writer’s conference and was required to bring a work in process. After much debate, he realized that A Silver Ring was his deepest love and he has been working on it full time since that time. He has recently edited it down to 105,000 words. For those not in the writing game... word on the street is that agents want first time novelist’s works to be around 100,000 words.

I had the great opportunity to meet Nate via twitter, and one early morning we had a great discussion as he was preparing to pitch his novel. The story is complex and intriguing, and transcends four generations. It is a difficult story to articulate in three minutes, but well worth the time to read.

A Silver Ring is story that transcends four generations of aviators. Derrick, the fourth generation, a Marine aviator faces a crisis that no pilot should face, yet he’s distracted having just lost a worthless heirloom at the heart of his family secret: Derrick is a knot in his family tree, and the fourth Hutchinson to leave the ring behind, before taking to the sky. The first three Hutchinson’s never made it back… will Derrick? 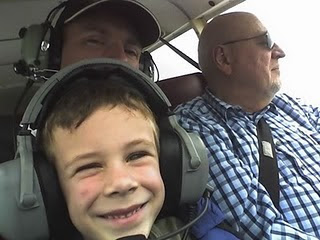 When I asked Nate if he had another novel within him he replied, “Absolutely, but I want to work on a screenplay next—to get something I've written made into a movie. I have three ideas: two involve obscure World War Two flying stories, and the other is about the world of airshow performers, who've always been huge, edgy heroes to me. The first thing I ever had published was a kind of a eulogy to two pilots killed in the summer of 2005. Their show was by far the best I've ever seen, and I could just tell by watching them fly that we were kindred spirits in love with flight, so it really hit me hard and I had to say what I did from the highest mountain I could climb. It's called Tailwinds, Masters, and it's posted to my website.” 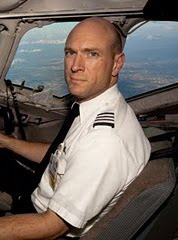 I have a feeling we will all be seeing much more of Nate Carriker! His books
and movies will be the greatest success, as Nate continues his passion for
flying and writing.

Visit Nate on his blog by clicking here.
And read more on his website.

~ Karlene
Posted by Karlene Petitt at 9:02 AM