Supermom doesn’t need a cape when she flies float planes. Nicole Saulnier, alias NicoleAtGBA on twitter, is a pilot, wife, mother of  three, and co-owner of Georgian Bay Airways.
Nicole’s is not your traditional pilot story, but one of destiny. In 1995 she worked next door to an airport and listened to the planes, all day long, call to her as they flew overhead. One day she decided to go see what it would take to learn to fly, and they told her, “give us all your money and we’ll make you a pilot!” And she did just that. 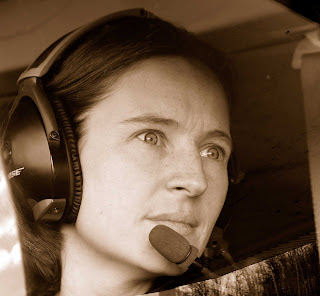 With a degree in advertising from Georgian College, in Barrie, Ontario, Nicole began working at an ad agency next door to an airport. However, already bitten by the flying bug, her heart was in the sky, and she gave up her fancy office to pursue her dreams. She eventually found her way to the Confederation College in Thunder Bay Ontario, in a class of 23 pilots.

This time Nicole was bitten by a different kind of flying bug, and she ended up marrying him. Keith and Nicole were classmates, friends, and coworkers, and began to date after graduation and their first season of flying together. One thing led to another, which blessed them with two beautiful children.

Nicole’s first job was flying charters, and instructing in a Cessna 180 and a Beaver. After their marriage, Nicole and Keith spent the summer flying for Ignace Airways. She flew the Beaver and he the Cessna 206. Did I mention the Beaver was on floats?

Yes! Nicole only has one hour on wheels since she obtained her commercial license. 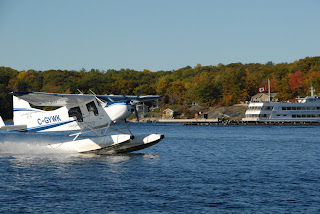 Nicole and Keith spent time flying in the Vancouver area, but realized Ontario was their home. They returned to Ontario, and Nicole became the Chief Pilot for 30,000 Island Air. At the end of the season, and with dreams of owning their own business, she and Keith were faced with a decision: to purchase 30,000 Island Air, or purchase their property.

They chose the property, and to venture out on their own. They re-birthed Georgian Bay Airways, which had operated from 1940 -1980. They revived the name, and carried on the legend. 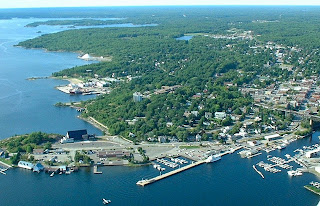 Today, eight years later, they have a thriving charter business, a gift shop and ice cream/coffee parlor. Grannie and day care help, but their children, ages one, three, and five can often be found in the store playing on the computer, and stocking shelves. Hopefully not coloring on the walls.

Nicole is truly an amazing aviator with a story filled with destiny, hard work, and dedication, all because she wasn’t afraid to give up all her money to become a pilot. Her challenges are unique while she juggles a career, business and family. I know she will succeed in all areas!

Nicole’s CAREER TIPS:
*  Don’t take NO for an answer
*  Never give up – set a goal and do what it takes to get there
*  Don’t doubt your abilities
*  You CAN have a career and family – it just requires less sleep and more determination
*  Follow your head, not your heart

Nicole, your heart has been guiding you. "Use" your head, but keep following your heart, and there is no limit!

~ Karlene
Posted by Karlene Petitt at 6:18 AM