Captain Danny Burke:
Captain Danny has combined 28 years of airline flying, of which 17 years were in an instructor, check airman, flight standards officer, and culminating as the chief pilot and general manager of flying for the western region of a large Part 121 Flag Carrier, integral with 10 years of flight test work, and most recently 18 years of corporate VIP flights for royalty, and a very wealthy owner of a large conglomerate. 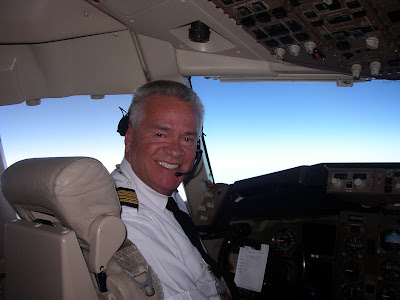 He states: “I believe in safety, and efficiency of operation with these large aircraft. Plan the work, then work the plan! ”

Captain Danny has flown onto all the continents except Antarctica. Ocean crossing long hauls of fifteen hours in a B747SP are not unusual. Nor are six sectors a day in a BBJ.

I first met Captain Danny when I was a BBJ instructor for Premair. This was definitely a case of the student teaching the instructor. He is an exceptional person and a superior aviator. We all have something to learn, and we’re always a student in an airplane. I am sharing Danny’s letter, and hope that we can all learn from his wisdom and vast experience.


You asked that I put together some thoughts about airline pilot training, when changing aircraft, or in your case from a long absence from flying. There follows then, my thoughts of what I consider to be important over and above the normal airline flight school training programs.


Airline pilots in training, tend to be complacent and apathetic towards transitioning to a similar marque of airplane. For example, when changing from a Boeing 767 to the Boeing 777, the systems are so similar (and designed that way); the FMC’s are so similar, with only the easily read displays to learn and comprehend. Does this complacency and apathy present a problem? Probably not, given the redundancy and reliability of the modern day aircraft.


But, faced with training on a different marque, such as changing from a Boeing to an Airbus, the airline pilot can no longer afford to be complacent in his learning. New nomenclature, new checklists, new presentations, new thought processes must be learned, must be committed to memory, and must be seriously studied.


The airline flight training department has expertise in guiding you, promoting your skills, assisting you through repetitive drills to attain your well earned type rating. But, this type rating is only a “learning permit” until you gain at least one thousand hours of line flying on the new type of airplane. Can you afford to be complacent and apathetic to incidents that occur as regularly as an encounter with an inebriated passenger? How can you at the early stages, during that first one thousand hours, gain important knowledge that may guide you through desperate situations that do occur?


Even during your initial training on any large aircraft, learn the line aircraft. And by that, I mean to learn:


1. The basic operating weights, and with a typical trip fuel requirement, what altitude can you initially climb to. Especially if you anticipate a maximum gross weight takeoff. Have this number in your head even before you search the computer flight plan for this information. This altitude is important to know when you search the weather patterns along your route of flight. You should know what time (elapsed time) that you can step climb, and will it be during your duty time, or during your break. If this step climb will happen while you are in the back of the airplane resting, make sure the relief pilot is briefed on how you want this done. This briefing should include reference to “coffin corner” area of the flight envelope, and turbulence penetration speed.


2. The weights, attitudes and N1’s of the airplane at (at least) three different regimes. The first should be easy weights to remember for you, like say 400,000 lbs. At that weight and at that cruising altitude memorize the attitude and the N1 setting to keep the airplane stable in flight. [400k / 2 ½ degrees / 91%] If you get to a point where this is important, the initial altitude is not as important as keeping the airplane stable along the pitch and roll axes. At this point you may or may not have an airspeed indicator, or EPR’s. But with these N1 and Attitude numbers you may be able to concentrate and save a situation like Air France got into over the mid-Atlantic Ocean. The other areas of flight that are important are the mid-descent area of FL250, where you encounter the some lower-level thunderstorms that still have potent lightning. If you get struck in that area, and all the displays go black, you must know that at 300,000 lbs you should have an attitude and N1 setting to keep the airplane stable in flight, until you are clear of the weather, or the instruments have reset themselves. And finally the landing approach weights and numbers associated with this very important phase of flight [300k / 4 degrees / 65%}. Takeoff plus five minutes, and Landing minus eight minutes are the most critical areas of flight that you will encounter. You should use your best judgment as to the regime of flight that you choose to memorize numbers for. And you should definitely use your best judgment and memorize these scenarios. If you are the First Officer on the flights, call these numbers out to the Captain, whilst you dig for the airplane’s Quick Reference Handbook. You may be the only person that has these special numbers in your head.


3. While you are in school (and after school, too) use some of your study time to read through the Minimum Equipment List (MEL) and the Configuration Deviation List (CDL) for your airplane. There is so much information included in this dry reading that can guide you when “things happen”, for your planning at departure time, and at the next stop. Also, there is a Dispatch Deviation Guide (DDG) that is associated with these two important lists. Do not let the first time you see these lists be the time that you need to make important decisions. This study will surely enhance all of your learning experience on the new airplane, and my help in the airplane “Oral” testing.


My best regards for your continued success as an airline pilot.
Capt. Danny Burke
Posted by Karlene Petitt at 4:20 AM