This Friday’s Fabulous Flyer is my friend Kathy McCullough, a retired NWA 747 captain. Retired yes, but Kathy continues to soar to new heights. 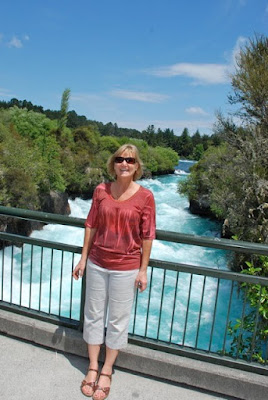 Kathy’s career choice was initially sparked by Dr. Tom Gadsden, an inspirational physics teacher who taught an aviation science elective she attended at age sixteen. Unfortunately her parents thought that flying was a terrible career choice, especially for a woman, and Kathy drifted aimlessly to Colorado, ‘clueless’ as to what she wanted to do in her life beyond learning how to ski. A career counselor placed her in an Environmental Science program and Kathy soon found herself in a microbiology class. While she loved the class, she also knew that life in a lab was not for her, and anyone who knows Kathy will attest to that. She is the ultimate people person. 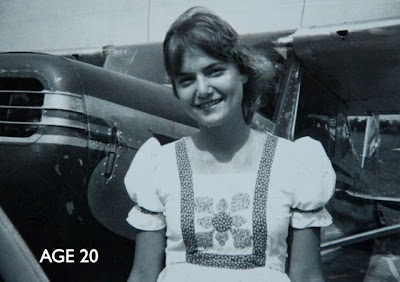 By the end of college Kathy had purchased her first plane, a Cessna 140 “taildragger”, and spent her days at Fort Collins/Loveland Airport in Colorado practicing her crosswind landings. Her instructor agreed to maintain her plane if she allowed him to fly it. Kathy say’s, “Building time was fun for me. I waitressed, pumped gas, and took on odd jobs to keep the money coming in. I married my flight instructor, so at least I didn’t have to pay for lessons.” Funny, I suspect any instructor would love to marry his gorgeous young student … and fly her plane for free. 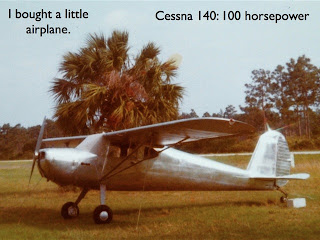 Kathy, and husband, moved to California to fly rock bands in Vickers Viscounts, he was the copilot/mechanic and she was the flight attendant… a job for Kathy that paid for her multi-engine rating. By the end of the summer, the music gigs were over, her husband was to turn wrenches instead of fly so he quit and went to work in a coal mine. Kathy followed and became a Health and safety Officer for the mine. Kathy continued to fly, this time a Cessna 206 out to the mines. Many nights she slept in the desert under a blanket of stars, with nothing but a sleeping bag to keep her protected from the scorpions that she later discovered scurried about. 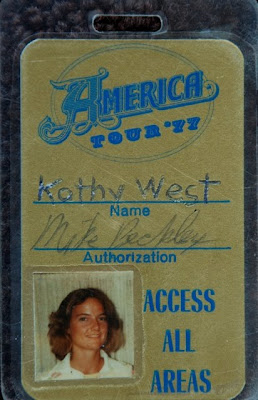 Kathy and her husband then ventured to Oregon where she taught flying at Troutdale, and he took a job at the airport. As life turns out, one of her students would end up being her next husband. While Kathy loved teaching, she accepted a job with the Forest Service in Boise, Idaho. She flew ‘so much’, they couldn’t legally log all the hours. While California burned in 1980, there weren’t enough planes and pilots to map all the fires and Kathy earned enough hours to be hired by Northwest Airlines in 1981. 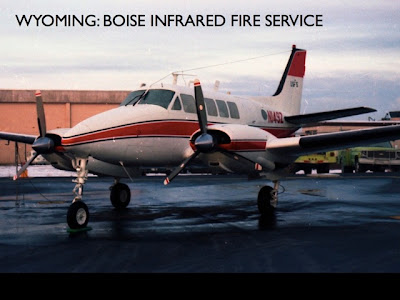 She started her twenty-six year career flying as a Flight Engineer on the Boeing 727. In the good old days the guys would allow the flight engineers to ‘take a leg’ and Kathy loved flying through the mountains, especially since every third leg was hers. After three years she moved to the DC-10 as a second officer and safety instructor. She took the new flight engineers, now we know as second officers, and taught them the ropes on the line. Minneapolis to Hawaii was her route, and she could be found taking her students to the Shorebird in Oahu for dinner after a long day. When the training department asked her to become an instructor, she’d just received a bid to fly as a first officer on the 727, and could not pass up the flying position. 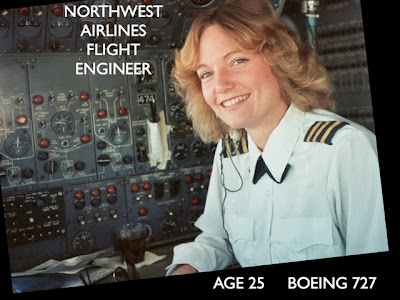 The flying as a first officer on the 727 was a different experience with the level of acceptance from some of the captains she flew with, than when she’d been a second officer. Kathy met her fair share of ‘captains from hell.” Life sometimes throws everything at us, at once, and during this time she was also in the process of an awful divorce. Not one to quit, personally or professionally, Kathy accepted a position as a second officer on the Boeing 747, found herself flying international again, and later married her once student.
Kathy would, “hit the ground running” on all her Northwest trips. Flying to Europe and Asia, she viewed her job as a vacation. She was a senior second officer, bid the best trips… three days in Singapore, two in Hong Kong… and was able to get massages, spend time reading, and sightseeing. Her time home was dedicated to her family. When Kathy was senior enough to manage the same lifestyle, she upgraded to first officer on the 747. Life was good. Many of the other pilots never understood Kathy’s choice of being senior, and flying for so long as a first officer. Heck, she could have been a domestic captain. However, as a mother who does it all… Kathy’s choices, like many working mothers, are based on the needs of the family first. She valued time with her children and husband as more important than the prestige of calling herself captain, and the few extra dollars it would bring in.

Opportunity did knock and Kathy checked out as captain on the Boeing 747. She said, “Sure, it was hard. Yes, I was treading water at times. But I loved it.” Unfortunately Kathy couldn’t get over being tired all the time. And when the stomach flu turned out to be appendix cancer, and visual migraines impacted her ability to see, she realized it was time to give up the airplanes. Retirement was challenging at first, and she had lost a huge piece of her identity, and a way of life. But not her life. 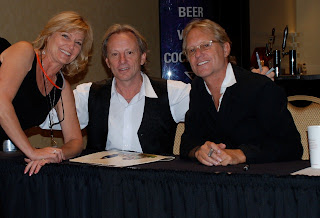 America - Gerry and Dewey in Florence, OR last summer... 33 years later
Kathy has never given up the ability to fly, and her life continues to soar. She says, “Now, five years later, it just keeps getting better. Retirement means no more jet lag, unless I want to take a photography class in Italy, or tour New Zealand. It means no more having to prove yourself… you’ve done it.” 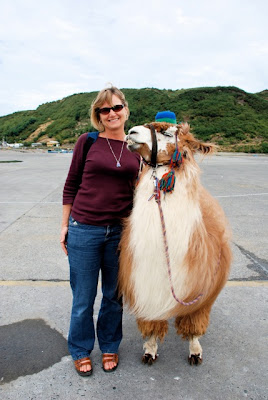 Kathy certainly has done it. She currently writes, travels, paints and studies photography. Kathy also shares her life by motivating teens, not necessarily about flying, but more about achieving their dreams, and sharing with them how exciting the world is. Kathy is an 'anti-fear' person who looks for the good side in everything. No wonder we hit it off instantly.
I met her while I was instructing as a second officer on the Boeing 747, she was my first officer and she introduced me to reflexology in Singapore. We’ve spent time on Mount Hood taking a watercolor class, traveled the world, and lost our car on a layover in Los Angeles at the racetrack. We have a great deal of understanding in the challenges unique to women pilots, who are mothers too and embrace the same philosophy on life. It's just pretty darn good! 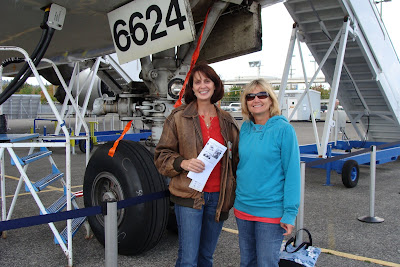 Kathy is happily married to Kevin, has two children, Darcie 26, and Colt 20. Two dogs. Two cats. And they recently placed wind generators on their wheat farm in Oregon. 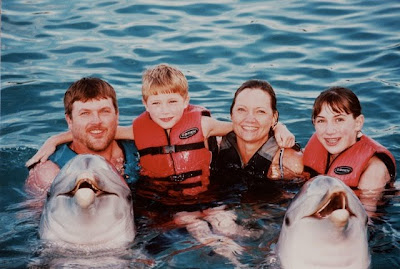 Kathy's outlook on life: “Change is the only thing that is certain. Love and gratitude are underrated. Enjoy life to the fullest.” 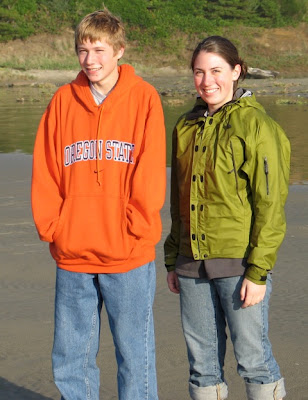 Colt and Darcie
Kathy, we all miss your smiling face, laughter, and positive attitude on the flight line…but you’re always with us. Please leave Kathy a message... I know she would love to hear from you! 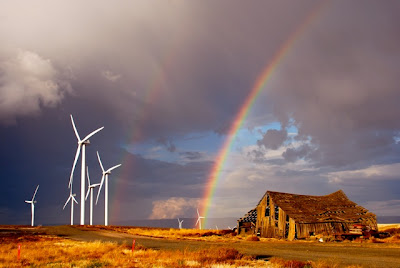 Posted by Karlene Petitt at 9:00 AM