I spent the entire day learning the Flight Control System and realized there could be an element of confusion if someone was simply trying to memorize facts to pass a test. The Primary Flight Control System (PFCS) identifies three modes of operation: Normal, Secondary and Direct. There are also three modes of operation for the High Lift Control System (HLCS). The middle mode is secondary on both, and one could think that high lift devices would be considered part of the flight controls, in that they include flaps and slats. 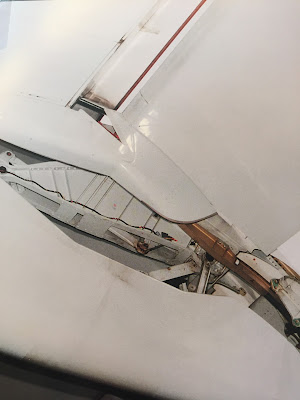 The B777 is a fly-by-wire aircraft. The PFCS is the electronic fly-by-wire system that controls pitch, yaw and roll, with Ailerons, Flaperons, Spoilers, Elevators, a Rudder and a Horizontal Stabilizer. The HLCS is also an electronic fly-by-wire system, however, this system controls Trailing Edge Flaps, Slats, and Krueger Flaps. The most important thing to remember is that these are two separate systems, both with multiple protections available for the pilots.

The PFCS has flight envelope protection modes, to include: Overyaw protection, Overspeed protections, Stall protection, and Bank angle protection. The HLCS protections include flap and slat load relief, autoslat extension, flap /slat sequencing and asymmetry shutdown. The best part of this system, depending upon perspective, is the retention of mechanical control with two spoilers, and the horizontal stabilizer.

Pilots give commands to the aircraft with the control wheels, the control column, rudder pedals, and speedbrakes. Position transducers change the commands to analog electrical signals. These signals go to the Actuator Control Electronics (ACEs)... there are four ACEs. The ACEs then change the signals to digital format and send that information to the Primary Flight Computers (3) (PFCs)....Not to be confused with the PFCS (Primary Flight Control System).

The PFCs calculate the flight control data and then send digital signals back to the ACEs. The ACEs change the command signals to analogue format and then send the signals to the Power Control Units (PCUs). The PCUs operate each control surface.

The PCUs have a hydraulic actuator, electro-hydraulic servo-valve, and position feedback transducers. The servo-valve causes the hydraulic actuator to more the control surface. Then the actuator transducer sends position feedback signals to the ACEs. The ACEs convert the data to digital format and then send that signal to the PFCs. The ACEs stop the PCU command when  the signal equals the position. 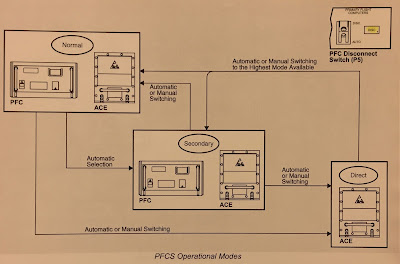 The PFCS three modes of operation:

The above description is how the system operates in Normal Mode. Protections functions are  also available in Normal Mode. The protection functions include stall warning, overspeed, overyaw and bank angle. Normal mode is also the only mode where the autopilot works.

If the PFCS loses important data it automatically defaults to the secondary mode, which operates essentially the same as the normal mode, but without protection functions and without the autopilot.

If the data that caused the default to secondary mode degrades further, or there are more failures that make Normal and Secondary modes unreliable, the system will kick into direct mode. In direct mode, pilot commands go directly to the ACEs and then to the PCUs. The Primary Flight Computers (PFCs) do not operate in direct mode.

There is also a two position PFC disconnect switch, on the P5 overhead panel. The switch is either in AUTO or DISC position. AUTO is the normal mode of operation. However, the DISC switch enables the pilot to place the PFCS into direct mode. This switch can also be cycled and moved back to AUTO with an attempt to take the system from Direct mode to the highest available, either Normal or Secondary.  An illuminated amber DISC light indicates the system is in Direct Mode.