"The first step in the evolution of ethics is a sense of solidarity with other human beings."

News Flash!
"August 13, 2021 — Today, The Aircraft Mechanics Fraternal Association (AMFA) is proud to announce that it has filed for union representation with the National Mediation Board (NMB) on behalf of the Aircraft Maintenance Controllers at JetBlue." Read more here.
Jet Blue is on the way to a safer operation
now that their mechanics have joined AMFA!
Last month I had the honor to speak at the AMFA National Convention in Nevada, and then again at local meeting in Seattle, this month. The topic: Safety Management Systems. What impressed me most about AMFA is their unity and focus on safety. When a mechanic reports an aircraft discrepancy and the company requests they look the other way or face job action, AMFA stands to the mechanic's defense. 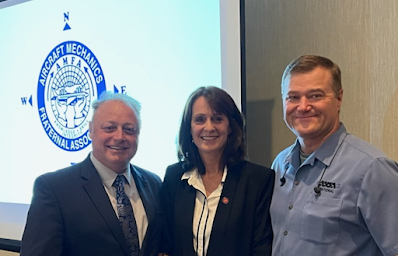 Bret Oestreich, National Director and
Will Abbott Region II Director
A positive Safety Culture is a group effort and necessitates a reporting culture free of retaliation. Safety Culture begins with leadership that encourages employees to report discrepancies in order to keep the operation safe. Time and again, we see management falling short on their ultimate obligation of safety when profit becomes the top priority. When this happens, the union must step in and enforce the regulations and protect the employee. AMFA does just that.
AMFA understands the protections of the Air 21 statute, in which no employee can be retaliated against for reporting safety, and they financially back the mechanics in their legal defense. This makes the legal battle an even playing field, where an airline can't terminate an employee and expect them to finance a defense on their own. When employees know they are protected, they will be more apt to not fear standing up to a manager who is coercing them into pencil whipping a logbook.
"Safety Begins with the Quality of Maintenance
on the Ground"
Unions are a necessity when safety is the goal. Without protected employees, you don't know what pressures have been placed upon the individual to put an un-airworthy aircraft into the sky.  Mechanics have been told, "your job or your license, you decide." But nobody should have to make such a choice.
In response to the many lawsuits of illegal actions taken against unionized employees, think of the silence at carriers where the employees are not protected. Safety Management Systems (SMS) makes reporting a legal obligation. If anyone is retaliated against for reporting safety concerns, or writing up a maintenance issue, and you don't have a union protecting you, contact Lee Seham at: Seham, Seham, Meltz & Petersen.
To learn more about AMFA and learn how to help your airline join the AMFA team, visit their website at: AMFA.
Congratulations Jet Blue!
The skies have just become that much safer.
Enjoy the Journey!
XO Karlene

Posted by Karlene Petitt at 1:38 PM