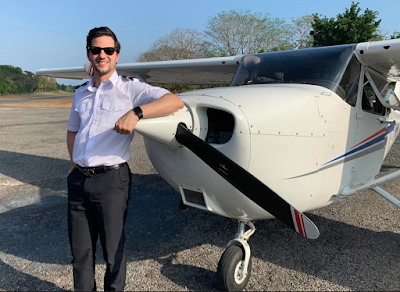 Alberto Valverde
Alberto's dream from childhood had always been to become an airline pilot. A dream that has never wavered. From San José, Costa Rica, he  graduated from college and was headed that way. But sometimes our dreams don't come as quickly as we wish. Alberto said,

"The expensive tuition fee added to the few studying possibilities in Costa Rica; they were reason enough to put the Pilot training aside. I was able to finish just doing my ground school and 2 hours of fly. For a moment, the idea of ​​being a Pilot was over."

At the age of twenty he enrolled with the economic faculty at the university and worked part-time to pay for his  studies. It took him six years, but he managed to complete his degree. He also had the opportunity to do a year abroad at the University of Leeds in England. He then returned to finish the last year in Costa Rica; and started working as a stockbroker.
Despite his success, he realized,

"The new job, my age, the salary, and the moment's situation opened the opportunity for me again to be a Pilot."

He began studying to become a Pilot from the beginning. Nine years had already passed since his first couple of hours. At this time he already had a beautiful son Julian and girlfriend, Alejandra. While life often deters dreams, Alberto pursued his. 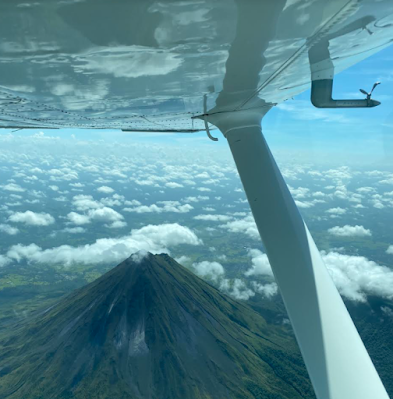 "The day arrived, January 18th, 2019. I would fly on the best aircraft in the world, the beautiful Cessna 172 Skyhawk TI-BHC. With my Instructor Josué Solano, whom I admire a lot, on April 11th, 2019, I made my first solo flight; on June 25th, I receive my Private pilot license. The dream had become a reality; I had a license in my hands that authorized me to fly as a PIC in an airplane; I couldn't believe it, ten years I had to wait. Then came the commercial and IFR training hours."

As Alberto continued his flight training hours in Costa Rica, he also worked as a stockbroker. He enrolled to do a Master's Degree in Finance at the University of Essex in England. In his words, "I love that country so much." 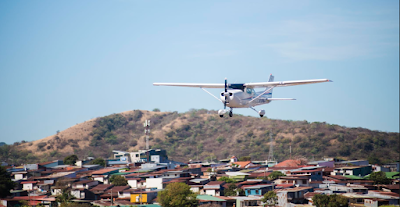 "I could fly for a few hours during the 2019/20 master year, but I kept accumulating some hours and experience flying over London a couple of times. For this moment, I had acquired a great passion for corporate and general aviation."
"However, the dream of flying an Airbus 350 or a Boeing 787 wearing a perfect uniform will always remain in my mind, but I don't know if, for my age, I can achieve that. I'am 30 years old. After my master's in England, I returned to Costa Rica to finish my Commercial License. I had managed to complete my hours and the pilot major. I was delighted to fulfill the dream of a child. However, the most challenging thing is to get a job opportunity as a Pilot."

"However, understanding the world aviation situation, I thought that obtaining the FAA licenses is necessary to my CV to find a job in aviation industry."

For this reason, Alberto was in the United States, Wichita, Kansas, where he was able to validate his private license to FAA standards. Not only that, but he took his IFR Check-ride, too. One of the most challenging ratings of them all. 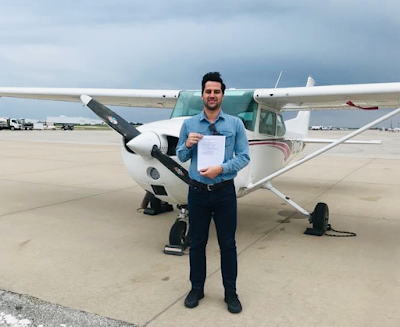 "Yesterday I did my check ride,
so finally FAA Private and Instrument Rated."
Wednesday he passed his checkride, and Thursday he was back in his country because he needed to finish a couple of things with work.  He plans to return to the US for his Commercial license and multi-engine rating the last week of July and expects to spends no more than one month because already has all the hours and requirements. Thus, he only needs to complete the check-rides and orals exams.

"The dream right now is to be, Private, IFR, Commercial, and multi-engine, with approximately 400 hrs in November 2021, I already have 300 hrs. For this moment, I want to try to apply to some aviation jobs, maybe fly a Citation, 737, 321 neo, A350, or a fantastic King Air. The effort has already been worth it, but I don't want to stay there. I want to take the next step, work for an aviation company."

"We all have dreams.  But in order to make dreams come into reality, it takes an awful lot of determination, dedication, self-discipline, and effort." Jesse Owens
Alberto has proven how dreams can become a reality. But he has also proven that he displays the qualities necessary to be an Airline Captain. He is a pilot who doesn't give up. His passion, dedication and commitment will carry him far.
Congratulations Alberto!
May all your dreams come true.
Something tells me they will.
Enjoy the journey!
XO Karlene