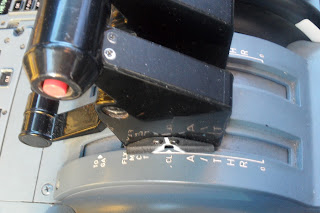 Years ago I wrote a post about the "Non-moving" thrust levers on the A330, and how they took some getting used to when transitioning from the Boeing to the Airbus. But the truth is, they are simply thrust levers. If the autothrust is not engaged they operate like any other thrust lever. Forward for more thrust and aft for less.  With the autothrust engaged, they are placed into one of four positions and the operation is equally as simple. 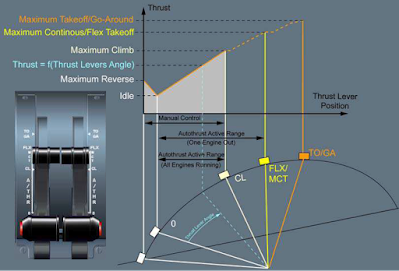 The four positions:
How They Work:
If you plan to use full power for departure, set the thrust levers to TOGA. If you want a reduced power takeoff, set them to FLX MCT. Moving the thrust levers to one of these two positions will "arm" the autothrust. This means during initial climb you will either receive Max Power  in "TOGA" or a reduced power setting, derate or Flex, when in the "FLX MCT".  The thrust is still in manual, because it's armed.
When you reach the thrust reduction altitude, you will bring the thrust lever back to the climb detent, CL.  Placing the thrust levers in CL "engages" the autothrust so the airplane now has the ability to give you the power necessary from idle up to maximum climb power.
They stay in the climb position  "CL" for the remainder of the flight until landing. Yes, even on approach. Conceptually it may appear odd to have a Climb Power setting for arrival and approach. But you don't. It's only available should the aircraft need it. What you need to remember is that in the CL position, when the autothrust is engaged, is simply enabling power "up to" climb power. Whatever the plane needs for a given speed and/or power setting is available.
If you lose an engine, then the operating engine thrust lever will be placed to MCT, which enables power on the good engine anywhere from idle up to max continuous. 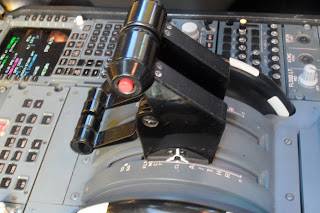 The red button on the side of the thrust lever is the autothrust disconnect pushbutton. If you were to push the button with the thrust lever in the climb detent, the power would go to maximum climb power. Why? Autothrust was disengaged while the position of the thrust lever was calling for climb power.  Manual thrust you get the power that corresponds to the position of the thrust lever. Therefore, prior to pushing the disconnect button, it's important to pull the thrust levers back to match the position with the actual power setting, and then disengage them.
If autothrust is  engaged and you pull the thrust levers aft to touch the idle stop, you will disengage the autothrust. Bring them back up to whatever power you want, and you now have manual control.
There is not a lot of mystery about these thrust levers. Initially I thought I would miss their movement as they found their way into my peripheral vision. But not a big deal. There are many more indications  as to advise you to your power setting than the need for thrust lever movement.
Training update
The Plane!
I waited (not so) patiently for my operational experience (OE), and then vacation rolled around, backed up to my days off. So, I gave up on the hope of OE and headed south for a 10-day road trip with my husband, to visit my Dad and sister in Palm Desert. The plan on the return trip was to stop in SFO to share what I know on the A350 with my friend who will be attending training soon. Then, heading to Sunriver Oregon to visit two of my grandkids and middle daughter, prior to our return to Seattle. We'll be rolling into Seattle on the evening of the 8th and I leave the very next day, for an 8-day adventure of another kind.
The day we headed out the door on the beginning of this adventure, I happened to look at my schedule and learned that I had been  assigned an OE trip to depart on the 9th, the day after I returned. My schedule: Deadhead to ATL for a 31 hour layover, then fly to ICN for a 63 hour layover. Which I'm not sure if I will be able to share my first flight because I might be in social media lockdown. However, after my extended delay in Korea, I will be the PF to Detroit for my first takeoff and landing. Six weeks from check-ride to the plane... but I have a plan!
Enjoy the journey!~ Karlene

Posted by Karlene Petitt at 6:52 AM