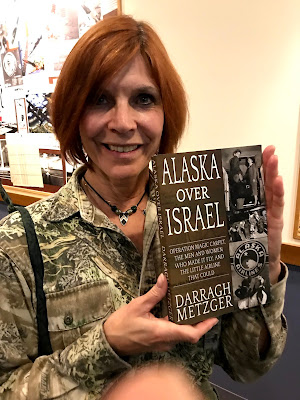 Darragh Metzger was born and raised in Anchorage, Alaska, entering the world via her parents' room. Her mother walked into the hospital carrying the infant forty-five minutes after Darragh was born, so she knew from a tender age that she had a legacy of hardiness to live up to. She learned to fly in her father's Cessna 180 float plane, enjoying trips into the nearly-inaccessible Alaskan wilds with her dad and brothers.

She now lives in Seattle, Washington, where she helps run her husband's theatrical company--The Seattle Knights, a stage-combat and jousting troupe--writing in her free time. She loves stories about aviation, and hopes one day to be able to produce a book of all the stories she's collected from bush pilots and pioneer aviators. Her publishing credits include plays, articles, interviews, short stories, and nine novels, several of which were previously released by another publisher and are now available from TFA Press in updated and revised editions.

I had the opportunity to meet Darragh at the Flight and Combat Museum in Everett a couple weeks ago. Not only is she an amazing author and pilot with a passion for aviation, she has extreme patience. I hope everyone has a chance to read her writings. 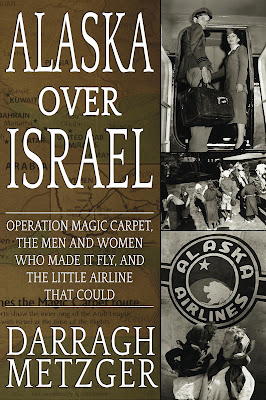 Known initially as "On Wings of Eagles" and later as "Operation Magic Carpet", the secret emergency Jewish Airlift that began in 1948 was meant to rescue Jewish refugees from around the world and bring them to their ancient homeland--the newly reborn nation of Israel.

In Shanghai, homeless Jews huddled in ghettos and prayed for rescue. In Yemen, entire tribes trekked miles of desert and robber-infested mountains to the ancient port city of Aden within the British Protectorate to await a miracle.

It came in the form of a tiny,
struggling American airline known as…
Alaska Airlines. 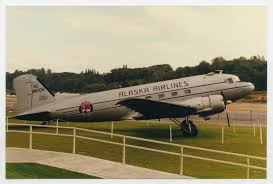 Alaskan pilots and crew little suspected they would create an aviation legend. With inadequate aircraft and no preparation, they risked their lives every time they lifted from Aden or Shanghai runways to fly Jewish refugees across Muslim territory to the new nation of Israel.

Warren Metzger and Marian Liscomb were among those who accepted the challenge. Dodging bullets and bombs, Warren, Marian, and their fellow Alaskans faced deadly peril, bureaucratic bungling, inspirational faith and courage, horrors and heroism to help fulfill an ancient prophecy. They bore the scattered children of Israel to the Holy Land "on the wings of eagles."