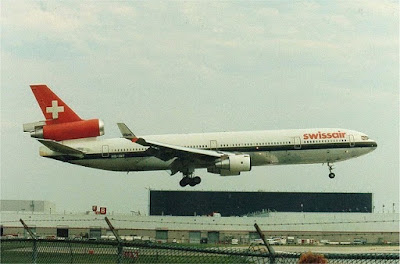 In memory of those lives we lost,
we loved, and we will remember forever!


Statement by the Chairman of the Transportation Safety Board of Canada concerning the investigation into the accident south of Halifax, Nova Scotia, involving a Swissair McDonnell Douglas MD-11 on the night of 02 September 1998.

"At approximately 1030 Atlantic daylight time on the night of 02 September 1998, Swissair Flight No. 111, en route from New York to Geneva, declared an emergency and disappeared from air traffic control radar off the east coast of Nova Scotia. Wreckage has been found approximately 8 km from Peggy's Cove, Nova Scotia. It is understood that 229 persons were on board the McDonnell Douglas MD11. There are no reported signs of survivors. Search and Rescue is looking for survivors and recovering the victims as a top priority."

My friend Ida reminded me of that fateful flight of Swissair in 1998, and that the anniversary was approaching rapidly. That day is here. She introduced me to Stelios Kaziras, who was manager of SR Station in Athens, Greece, and worked with Swissair from 1974 - 2001.  Ida tells me that he is sort of a historian on Swissair history, and posts lots of facts and events from Swissair and the Airline Industry in general.


"Already 21 years passed, after, we Swissair staff ‘faced the unthinkable’, the crash of SR111 JFK-GVA-ZRH the fated IWF “Vaud”. The Halifax tragedy stays vivid in our minds and reflects with brutal clarity the unpredictable and relative nature of our existence.

SR111 left JFK on the 2nd of September at 2018 LT, for his routine flight to GVA and ZRH with 229 souls on board. The aircraft was piloted by Urs Zimmermann (50) and First Officer Stefan Lowe (36). At time 2214 LT was flying over the Canadian coast and was in contact with Moncton Centre in Halifax when a distress message was sent reporting that smoke was spreading in the cockpit. Over the next 10 minutes the situation became critical and at 2224 LT the Captain addressed “ we are declaring an emergency we have to land immediately “ seven minutes later at 2231 LT the Swissair MD11 disappeared from the radar screens and crashed in the Atlantic Ocean eight kilometers from the harbor known as “Peggy’s Cove” in Nova Scotia.

This is in short the story of the crash of flight SR111 that hugely affected our lives within Swissair.

There are times when every one of us has to traverse the path of sorrow. In those hours we were with the relatives of the lost souls, Passengers and Crew of SR111 with heartfelt wishes for a hope filled tomorrow".  Stelios Kaziras

Transportation Safety Board of Canada 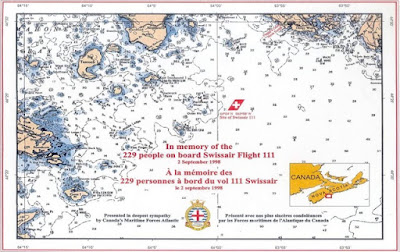 Presented by the Canada’s Maritime Forces to the families of 229 people on board SR111 and to the emergency teams of Swissair directly involved.