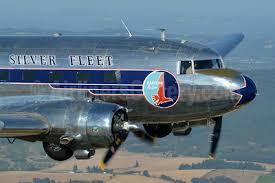 "From fabric to metal fuselage and wings, changes were rapidly occurring in aviation. From the pioneering days of the Mailwings to the Curtis Condors and Kingbirds the introduction of the Douglas DC2 – an all-metal aircraft - enabled Eastern Air Transport to cut the scheduled time from the Northeast to Florida to just eight hours. Shortly after, the Douglas DC3 arrived on the Eastern property giving Eastern the title of its fleet of aircraft – The Great Silver Fleet. The Year was 1935 and to market the new speedier aircraft this song was introduced..."

or listen in by clicking the hyperlink:
www.blogtalkradio.com/capteddie.

Posted by Karlene Petitt at 3:03 PM