Life is about perspective

"Life happens and then
we must put it in perspective." 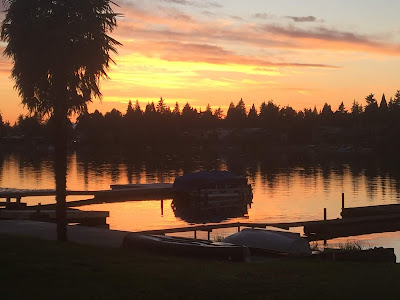 
The reason I have been off the radar this week.


I have been out of work for a month because my dermatologist found a bit of cancer. This was not a new spot, but this year they biopsied it. Everything happens like it should. Some say they should have noticed last year. But sometimes we get what we need, not what we expect. Therefore I was temporarily grounded. Yet able to work on my research. (More to come on that).

The fun continues. Last Saturday my husband's gut burst open. Literally. Infected gray fluid spewed out on the golf course. He thought it was an old surgery hernia and was trying to keep it hidden from me, to make it through the summer and not lose his golf season. He knows me so well. I would have dragged him into the doctor.  Of course I was furious because we could have found this earlier had it taken care of, scheduled with his doctor, and then we could have recouped at the same time.

Well, less than 12 hours after I learned he was hiding what he thought to be a hernia, it burst open, and 5 hours later he was in the operating room for 3.5 hours. It was more than a hernia, it was a monster infection in the patches from previous surgeries. His surgeon wasn't on call. At the time I was disappointed. Not to mention, if it wasn't hidden, we could have scheduled it with his surgeon. Thank goodness he didn't tell me. Thank goodness that doctor wasn't on call. Everything works as it should.

Thank goodness I had cancer
and could be home when this all happened!

The on call surgeon said, "This was like an archeological dig." He found four different types of mesh, and it was all infected. They are not sure what started it, but even the pig membrane mesh was compromised, and there was an additional infected cyst buried within his intestines. The last time he had a patch was a year ago. The surgeon said this was the oddest thing he's scene because normally these infections begin shortly after surgery, not years later. The doctor also said that thanks to my husband's level of activity, this broke to the surface. Otherwise, he could have become septic, and would not be with us right now.

This new doctor removed all the patches, cleaned him out, and sutured him up with heavy duty sutures. No patches. Would the other doctor have done that? At this point, I'm not so sure since he now has been proven to leave all that junk in him from before. Timing is everything.

So, five days in the hospital and counting. We were supposed to have gone home yesterday but someone made a clerical error and spelled his name incorrectly, therefore they had to resubmit the paperwork for the required wound vac, which didn't come. He has a rather large and quite gross opening in his gut, and the reason for the wound vac. Something that he will be connected to for the next 8-12 weeks.

Therefore, paperwork is keeping a patient in the hospital, not health. I'm trying to gain perspective on this. Human error happens, but I cannot help to believe that if a human were involved in ordering the pump, versus incorrectly inputting data into a computer system, that even with an incorrect spelling of a name, a phone call between two humans could not have prevented this delay. The problem is, that a computer system may be designed to use logic, but I don't think they have been programed to use common sense quite yet. Something to remember when they try to remove pilots from aircraft.

Human error happens.
It's what happens after the error
that counts.

But this not really
the longest day of the year,
I personally think last Saturday was.